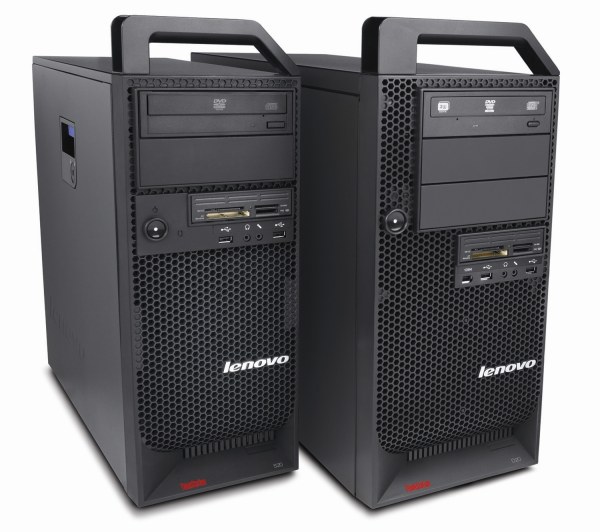 We’re about to head off to GDC in San Francisco and mix it up with a bunch of game developers. Sounds nerdy, yes, but these guys are on par with Hollywood FX artists in the depth and complexity of their craft. It’s no surprise that they need a bunch of beastly machines to make games like Final Fantasy XIII and Gears of War 2. Lenovo’s in the business of making said machines, and their latest look pretty solid, in addition to being well-designed.

The cases for the S20 and D20 ThinkStations actually look nice enough to sell separately, so keep an eye on Lenovo desktops to see if you can score one. It’s got the usual ports, a display on the side, and carrying handles on both the front and back. That helps a lot in situations where boxes get moved around a lot — mainly businesses and LAN parties. The guts are either a Xeon 5500 or W3500, and for a graphics card you’ve got your choice between NVIDIA Quadro or ATI FirePro cards. Or this Tesla thing I haven’t heard of, which is mainly for math computation. For putting together those math games you guys all love so much.

It’s also super economical in power and noise as well as being really eco-friendly. They use a ton of recycled and post-consumer plastic in the case, although of course the components are still mostly toxic — of course, even the cardboard computer had that problem. Even if it’s not completely effective, it’s always good to see companies making that move towards green.