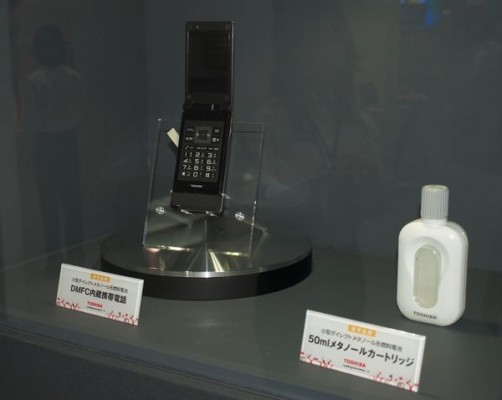 Japan’s biggest newspaper, the Nikkei, is reporting that Toshiba is finally ready to roll out portable fuel cells for the mass market (as of this writing, Toshiba’s Japanese website doesn’t have any information on this yet). The company even announced a fuel-cell powered cell phone in October last year, but it doesn’t seem likely we get to see that handset by the end of this month (as promised by Toshiba).

Toshiba is the world’s first company that mass-produces fuel cells. Starting next month, a factory in Yokohama will turn out fuell cells that are based on methanol and can be used to charge cell phones or notebooks.

The fuel cells will cost between $100 and a whopping $500 at first, but Toshiba expects these prices to drop significantly after ramping up output. Toshiba mobile phones and notebooks with built-in fuel cells are now announced for the next fiscal year, which ends March 2010.

By fiscal 2015, the company expects to rake in $1 billion in sales of fuel cell-based products.