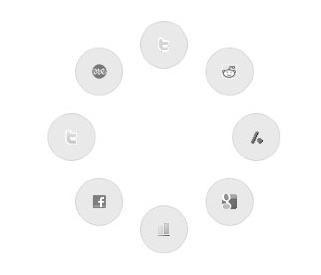 Mozilla Labs is experimenting with a design for a new tabs page in the Firefox browser that will show a circle of the top sites you visit that is reminiscent of the circle of friends design you see on many mobile phones. (Except, who needs friends, when you’ve got the Internet?) When you open a new tab, instead of a blank page, you would see a watermark of icons representing the eight or so sites you visit most often. By mousing over the circles, the the tab page would fade into the actual links.

This is just a concept design, but using that blank page when a new tab opens up makes sense. Aza Raskin of Mozilla Labs calls the watermark a”cognitive shield” because it is supposed to protect users from the clutter of all the links unless they explicitly mouse over the watermark. Also, it doesn’t appear if you start typing something into the address bar. He says he is considering making the circles themselves clickable, which would be more intuitive and eliminate a step. Giving users the ability to customize which sites show up in the circle would also be helpful.

The add-on only works on the development build of Firefox 3.1 right now, and may or may not find its way into a future general release.