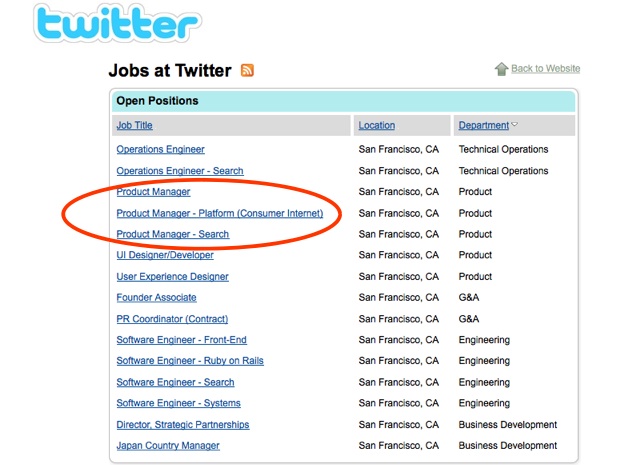 If you want to know what the strategic priorities are for a startup, sometimes you need to look no further than the positions they are trying to fill. Twitter, which is growing like crazy and just raised $35 million, is hiring engineers and business development people. But three new positions recently popped up for what appear to be Twitter’s first product managers. They are for the Twitter service itself, Twitter search, and the Twitter API Platform.

Reading the job-board tea leaves here, Twitter is signaling that those are the three most important areas that it will be focusing on: the main service, search, and the platform. The first one is obvious, a growing company needs a product manager for its main product. But the other two suggest that beyond its basic service, Twitter sees its future as platform for other apps and as a search engine.

Of course, Twitter is already a platform for hundreds of other apps, which helps to drive substantial usage of the underlying messaging service. The more messages that people create the better. And that is where the need for the third product manager comes in. Twitter’s real-time search is how people are going to sort and filter the messages on Twitter, and it will drive usage even higher. Right now, most people read the messages that they happen to catch while they are on Twitter.com or see through an app developed by Twitter. With search, the growing archive of micro-messages can be mined for both fun and profit. That’s the job I would apply for.