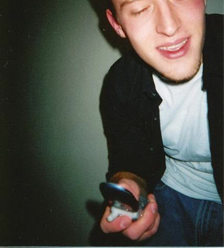 The ubiquity of the cell phone has made communication easier than ever, allowing people to reach their friends and family on a whim though phone calls and text messaging. Unfortunately, many of us become especially motivated to use these powers in various states of intoxication, often resulting in incoherent or potentially offense messages to former flames, co-workers, and people with whom we haven’t spoken in half a decade. In the last few months we’ve seen a number of approaches to preventing this phenomenon, widely referred to as the ‘drunk dial’, and today sees the launch of a handful of new iPhone applications that may well be exactly what we’ve been looking for.

The two applications, dubbed ‘The Bad Decision Blocker‘ and ‘Don’t Dial!‘, prevent users from calling designated contacts for a set amount of time (anywhere from hours to days). By banning certain ‘trouble’ contacts before a night out, users can potentially avoid any embarrassing phone calls or text messages.

I tested The Bad Decision Blocker, and Don’t Dial! seems to work the same way. After selecting the contacts that you’re looking to ban, the application asks how long you’d like to keep yourself from calling them. Once you’ve finalized the time period, the application overwrites the data in your iPhone’s address book, making it impossible to recover until you relaunch The Bad Decision Blocker after the alloted time has passed. As far as I can tell there isn’t any easy way to circumvent the block (even deleting the application doesn’t work) – a necessity given the great lengths some intoxicated users will undoubtedly go to in attempts to recover the phone numbers.

One added feature that ‘Don’t Dial’ has is the ability to designate a friend as your phone’s guardian – only after they enter pre-determined password into the phone (presumably after you’ve sobered up) will you be able to start calling your blocked contacts again. This of course assumes that you trust your friends.

For those readers looking to take their Drunk Dialing to the next level, there’s Dudler, which allows you to shake your phone to call a random contact (you can choose to always ignore a few contacts, like your mother, but doesn’t that take the fun out of it?)