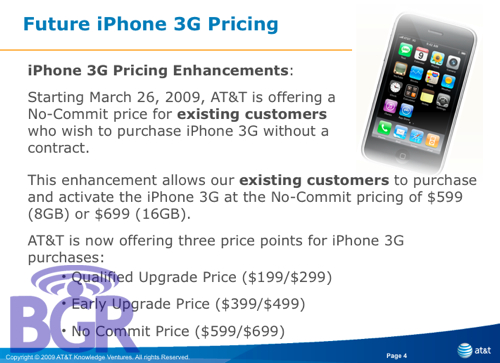 Attention existing AT&T customers who have been eyeing an iPhone 3G . Stop whatever you are doing, grab a red Sharpie, and circle March 26, 2009 on your calendar.

What’s the catch? Well, for one thing, the price is for “existing” AT&T customers only. Also, there is a limit of “one per line” which, as BGR speculates, probably means you need to have at least one active AT&T line at the time of purchase.

On the flip side, apparently there is no way for AT&T’s system to determine whether you have already fulfilled your “one per mobile number” quota, making it theoretically possible for you to go buck wild on no-commit iPhone 3Gs.

The real question here is, what does all this mean in the grand scheme of things? Is AT&T trying to clear its 3G shelves? Will Apple unveil new hardware along with its iPhone OS 3.0 launch this summer? While there is no way to be sure, history does point in that direction.