Nearly all of the time I dedicate to work and personal life on my computer is spent inside a browser, so speed and using software that ‘just works’ are very essential to me. As a Windows user, I currently use both Firefox and Google Chrome, but unless I really need a certain extension lacking on Google’s browser I’ll use Chrome as much as I can and avoid opening the many tabs I usually need to fire up in Firefox. I don’t even look at all the tests comparing the speed of all the browsers anymore. I tried all the latest versions of all the familiar browsers on my machine, and Google Chrome – which yesterday got an even speedier beta version – just makes my browsing experience more of a delight than an annoyance, even if it only feels faster.

Even so, it’s safe to say its adoption rate can hardly be deemed staggering, which is why Google puts so much effort into promoting the software program on its own (vast) advertising network. (The fact that Google Chrome is lacking a Mac-compatible version doesn’t help). Today, Google is launching another initiative that is meant to drive more awareness for the JavaScript processing speed of its browser and the V8 engine it runs on, in the hopes that it will lure more users into trying it out and subsequently sticking with it.

The project is called Chrome Experiments and basically features – at launch – a total of 19 JavaScript-based games, tools and visualizations created by a number of external designers and developers such as REAS, Toxi and Mr. Doob. I tested most of the mini apps and they’re nothing special as such, most of them are basic games and random visualizations, although some stuff I’ve never actually seen inside a browser and particularly not built with JavaScript. For instance, some of the experiments include a visual effect controlled by the user’s physical movement caught via Webcam, a video puzzle spread across different browser windows, and Flash-like graphics done in Javascript.

The website, besides being distinctly black, lets people try out the browser apps and rate, comment on and share them. Developers and designers are meanwhile encouraged to voluntarily create other experiments using JavaScript (and other languages) and submit them for review.

And we thought the team was focused on building a version supported on Macs. 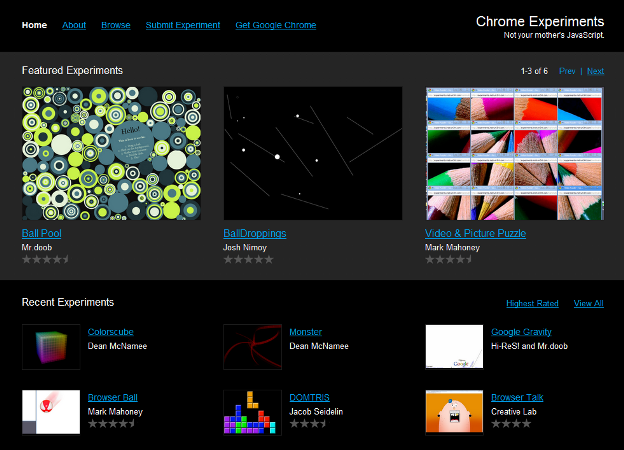