We are getting reports that Microsoft’s PubCenter, a self serve thirty party ad publishers platform through AdCenter, is doing quite well with beta testers. Microsoft began testing PubCenter last summer.

One beta tester we spoke with said PubCenter is paying significantly more than Google AdSense and Yahoo Publisher. All three of these programs let third party publishers add contextual ads next to their content via a self-service format.

Google has dominated this space in the past (and all other contextual advertising) because it offers publishers higher fees for ads. But this might change when Microsoft unveils PubCenter to the greater publisher community, particularly if Microsoft is aggressive in revenue splits to gain market share.

Currently, PubCenter is being tested by a small subset of web publishers. Our tipster says that he receiving from four times more in revenue Microsoft than Google AdSense. And the money isn’t the only advantage PubCenter has over AdSense. The advertisement themselves are are higher quality than Google’s ads, he says, and equally as targeted towards the content. He says that Microsoft seems to be more stringent about letting advertisers into the program, versus what seemed like an advertiser free-for-all though Google’s AdSense. Of course, with a smaller inventory of advertisers, it’s tougher to provide contextual ads for obscure content.

We also heard that Microsoft is allowing publishers to get creative with ads by allowing them to set background images. Google AdSense only allows publishers to change the color of the ads.

Microsoft is allowing test partners to publish Google ads on their site as long as the publisher doesn’t have an exclusivity agreement with Google. Third party ads are a controversial concept, since advertisers expect the click throughs and conversions that they get from search. Google has been sued for fraud because ads placed on parked pages weren’t producing results. But if Microsoft is offering a better program, with nifty, more targeted ads, then publishers and advertisers alike might make the switch (or use both, if possible).

Microsoft said this about PubCenter in February:

PubCenter will be built on the existing adCenter Publisher architecture that is currently in beta and will include the convergence of technologies and tools provided by the former Atlas and Rapt solutions, as well as a self-serve offering. The new platform will provide innovative forecasting and order management solutions, advanced analytics tools, and enhanced targeting functionality to enable all digital media publishers to have access to the tools and technology they need to provide valuable and relevant ad content to their advertising partners.

Here are some screenshots of Microsoft’s ads on a publisher’s site and an ad with an image in the background: 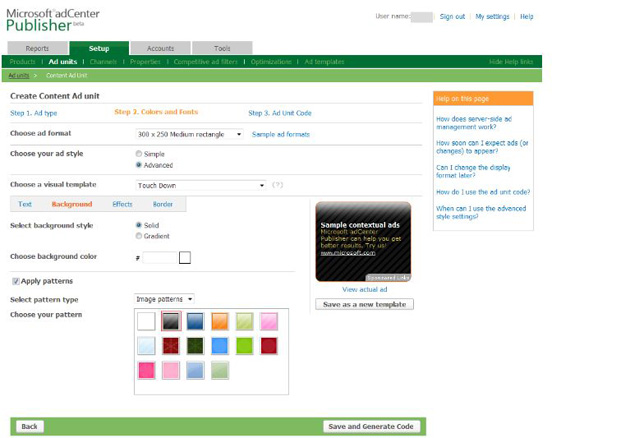 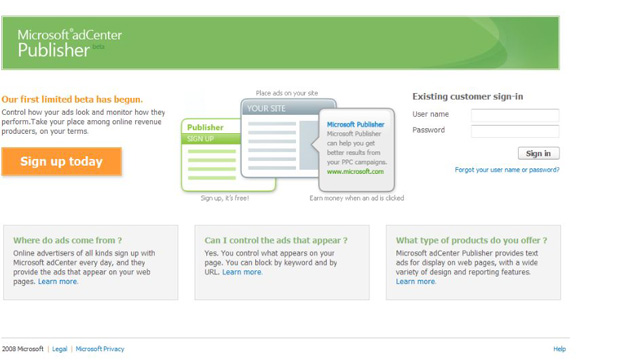 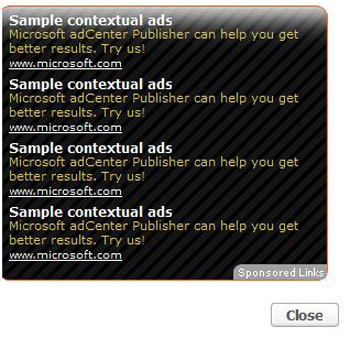