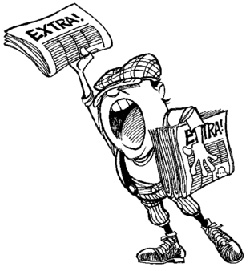 Even though we’re losing newspapers left and right in the U.S., people ought not be afraid for the future of news, journalism, etc. So says Steven Johnson, author of, among other things, The Invention of Air. Johnson, speaking at a panel at SXSWi, tried to allay the fears of every kid in journalism school—and those of us who recently graduated, lol!—by saying that people need only look at how technology journalism has changed in the pst few years to get a better understanding of how the news will “work” from here on out.

Think of it like this: back in the day, where would you have heard about the release of a new Apple product? Most people would have read the latest issue of MacWorld, which, sorry to say, by the time you read it would have been several weeks, if not months, old. “Apple released a new widget on June 1,” as you’re reading the article in the September issue. Nowadays, you can read tech blogs like us here at CrunchGear, or our amigos at Giz or whatever, as the product is being announced by Steve Jobs. Here, technology didn’t destroy the news business, but made it more immediate. The shotgun analysis may seem a little hurried at times, but 9 times out of 10 one of us will have a longer “what does this mean?” post in the following days. The more you know!

“Regular,” non-technology news is moving in the same direction. During the presidential campaign last year, you could have visited any number of sites to stay informed. You could have watched debates live on CNN.com (and downloaded them right after on iTunes), could read the play-by-the of the 24-hour news cycle on something like Talking Points Memo or Andrew Sullivan’s The Daily Dish , or could have gotten a Daily Show-esque perspective from Wonkette, which is probably my favorite site on the Internet—or you could wait till the Daily Show itself hit your iTunes subscription iTunes subscription or from TheDailyShow.com . Even the New Yorker has podcasts now!

Basically, it’s not that news is disappearing, but rather that it’s changing. Technology fans have been riding the wave for some time, but only now are non-tech fans trying to adapt the Internet to their news-gathering and reporting organizations.