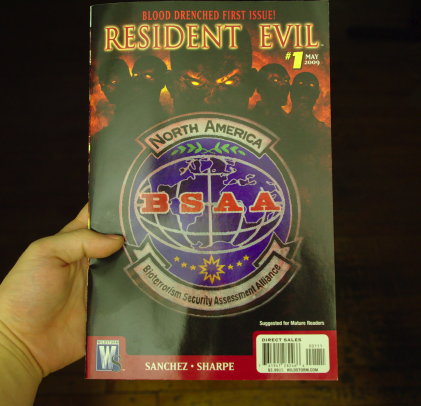 After some mishaps thanks to UPS, I finally got my copy of Wildstorm’s Resident Evil #1. I’ll get right to it, kids. Kevin Sharpe’s artwork is vibrant and great to look at but it doesn’t seem to mesh well with Ricardo Sanchez’s rather quirky storyline that follows B.S.A.A. (Bioterrorism Security Assessment Alliance) agents Mina Gere and Holiday Sugarman in outer space. Spoooooky, right? Well, not so much in this comic book nerd’s honest opinion. This six-part series is meant to be a prequel to RE5, but the first issue doesn’t do much to lend evidence towards that. But I think I’ll stick it out and see what happens. Anyone else pick it up?