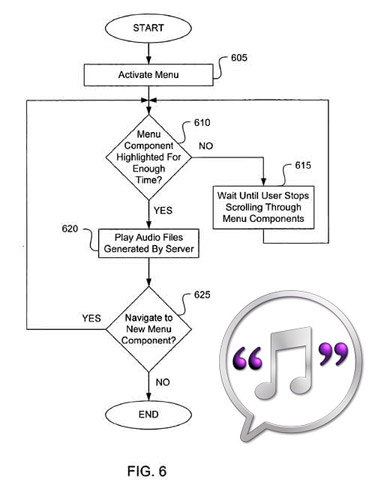 Apple is really promoting VoiceOver, a new feature found in the just-announced iPod Shuffle. As you may already know, when VoiceOver is activated, the iPod “says” the name of the currently playing song or playlist. So, when I hit the song I want to hear—this week, that’d probably be “Hardcore Girls (Don Rimini Remix)” by The Count and Sinden—the iPod “says” the name and artist. It’s sorta superfluous, yes, but the technology behind it is pretty neat.

For you see, it’s not that the iPod Shuffle itself is scanning the music file on-the-fly, then saying the name. Nope, all of that is done in iTunes beforehand. (The next version of iTunes, version 8.1, will launch the VoiceOver feature.) Apple filed the relevant patent a little more than four years ago.

What happens is that iTunes goes through all your songs, then uses the built-in operating system accessibility voice—a female voice on Windows, a male voice on Mac—to “say” the song names, etc. This small audio file is then attached to your file, and, should you move the file over to the iPod, it’ll activate if you have VoiceOver turned on.

So like I said, it’s a pretty neat little work-around—the iPod Shuffle probably doesn’t have the horsepower to analyze a file name, then “say” it—but one with limited appeal. Your mileage may vary, of course. as you may think it’s both a neat and useful technology.