Voxli, a new Y Combinator startup launching today, is looking to make group voice chat as simple as possible. The service allows gamers and team members to visit a static persistent URL to join a group chat session, and features push-to-talk using a browser plugin. Voxli is available on Internet Explorer and Firefox (both Mac and Windows) with support for more browsers on the way.

At launch, Voxli is focusing on making its service appealing to gamers, who often like to speak with each other as they play team based games. In-game voice chat isn’t a new concept – I remember using a program called Roger Wilco to play Counter Strike nearly a decade ago. Since then games like World of Warcraft have made voice chat a necessity, as they revolve around large-scale group activities (called raids) where communication is essential. 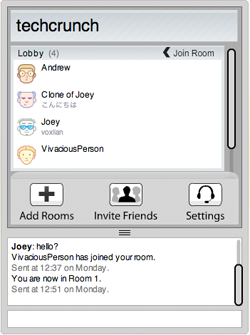 Now there are a variety of chat clients available, including Ventrilo, TeamSpeak, and Mumble. But most of these require manual entry of port numbers and server addresses, which can be confusing. Voxli gets around these issues by offering users a static URL that they can then send around to their team members, which is far more convenient. Voxli is also a browser plugin, not a native client, which the team believes will make it more appealing.

To use Voxli, users assign a hotkey to their chat room which they press whenever they want to speak in-game (the hot key works regardless of which application is open). The system supports up to 200 simultaneous users per room, and gamers can open new tabs if they’d like to participate in multiple chats at once (they can assign a different hot key to each room).

For the duration of its public beta period, which will last 1-2 months, Voxli will be free for everyone, with no registration required to get started. This lack of restrictions comes with one major caveat – there’s currently no way to restrict access to your chat room, so a rival guild member could potentially infiltrate your group (the Voxli team says introducing restricted rooms is a top priority). Eventually Voxli will begin charging users a modest amount, but the team says that its reduced infrastructure costs (they use services like EC2) will allow it charge around half of what its competitors cost.