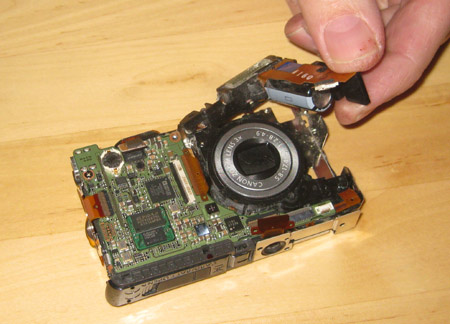 I’d like to tell you that some awesome camera manufacturer has made a point-and-shoot type camera with a replaceable lens element. But that wouldn’t just be a lie, it’d a damned lie. If you ask, Canon or Pentax would probably say it’s impossible. Still, hackerish types around the world won’t let something like that get in their way! One such character found himself in possession of a busted Canon SD750, and figured he might as well take a shot at replacing the lens if he was going to have to chuck it anyway.

He photographed the process (wouldn’t you?) and has included how to go about it if you too have an old point and shooting collecting dust in a box. “Easy” isn’t the first word I’d use to describe what he did (power drill on the PCB?) but he didn’t seem to think it was hard.

I feel I should say that to do this is essentially to point a loaded gun at your camera and pull the trigger. You should be prepared to utterly destroy it from the moment you pick up the screwdriver.