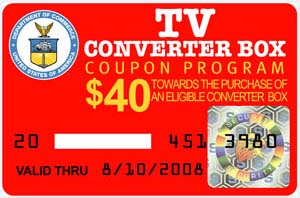 HUZZAH! Thanks to Obama and his buddies in Congress, consumers will soon be able to redeem a DTV coupon for $40 off of a DTV box. The Economic Stimulus packaged funded the program with $650 million which should help the millions waiting for these coupons.

There is also word from the AP that the rules might be changed up a bit. Currently the coupons carry a 90 expiration date which many people didn’t know the first time around. which resulted in many unredeemed coupons. Now, the folks in charge might allow all those cards that were not used to be ordered again.