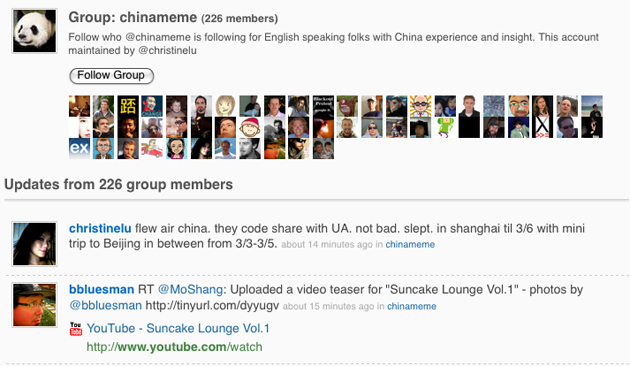 Ginx, the third-party interface for Twitter that makes it easier to share news with friends, has added a new feature that organizes experts into groups so you follow their ongoing commentary on your favorite topics.

Each group on Ginx is created and administered by a single owner who determines who the experts are in a particular field or category. For example, here’s a group of journalists who are focused on covering Apple news. It’s run by the user mirthlab and members include John Gruber and Arnold Kim.

Currently there are 11 groups in total on Ginx, and all of them are listed in this simple directory. The others include one about China and another about Arizona politics.

If you’re interested in hearing what the experts in a particular group have to say, you can become a follower of that group with a single click. All of the tweets from the group’s members will then show up in your Ginx timeline, regardless of whether their tweets are related to the group’s topic or not. When asked about whether it would be better to just show followers those tweets that are relevant to a group’s topic, co-founder Pierre Omidyar insisted that getting the whole stream of tweets from group members actually lets you learn more about who the members are as people. And in turn, this makes the news and commentary you get from them more personal.

This new groups feature is a natural addition to Ginx’s core functionality, since it advances the notion that Twitter should be used to learn and educate others about the world. It does pose the risk of information overload, however, since by joining just a few groups, you’re expanding the number of people who contribute to your timeline considerably. In anticipation of this problem, there are checkboxes next to the timeline that let you temporarily remove all tweets from a particular group. But something tells me that most users will still want to be part of only one or two groups at a time, lest they have trouble separating the wheat from the chaff.

Only select users have the power to create groups, although I’m told that this will change soon so that anyone can set up their own. Everyone can start following the existing groups today, and if you’re not already a Ginx user, the first 100 users to sign up with this code will get in: 842A11AC93EA.

Update: We’ve created a group with TechCrunch employees that you can follow.