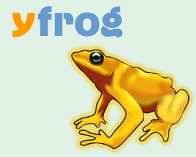 ImageShack, the oft-forgotten and underestimated venture capital backed media hosting company, has quietly launched an alternative to the image sharing tools for Twitter already out there, like TwitPic and Twitxr. The tool is called Yfrog and like its counterparts it allows for immediate posting to your Twitter stream any image you upload or link to.

Evidently, the image is hosted by ImageShack, so this is just another way for the company to get more people to learn about their media hosting wares. Once the image is up (example showing a guy eating a yfrog), you get the usual stuff like embed codes, custom thumbnails, a direct link to reblog and retweet the material, etc. We should note – and I’m getting tired of having to say this every time – that you have to enter your Twitter credentials to use Yfrog so that’s up to you.

Like TwitPic, YFrog has its own API, but the former is also built into most popular Twitter clients, so they have the advantage of already being familiar to most Twitter users who are interested in this type of service. TwitPic, which by the way is growing in traffic quite quickly, also enables you to comment on pictures on-site, has better navigation, tags and lets you view images in full size. Yfrog has some catching up to do in terms of features and integrating into the widely used Twitter clients.

Personally, I switched to Posterous some time ago, which lets you e-mail photos from your desktop or web client as well as your mobile phone and pushes the link for short blog posts, pictures and videos to a variety of social services (including Twitter). Also, it doesn’t show ads next to your uploaded pictures.