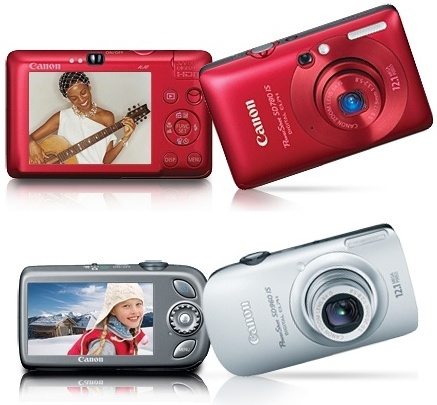 Looks like Canon updated their site’s database a little too soon; a pair of point-and-shoots no one’s ever seen made it in there. Oops! They’ve since pulled the data, but the intrepid Canon Rumors snagged screens and stats before Canon realized the mistake. Here are the two new shooters in their modest glory.

I like the styling. This is a new slim, midrange point-and-shoot with 12.1 megapixels, a 3x optical zoom, a 2.5″ LCD, and Digic IV image processor. It’s also got a 720p movie shooting mode and HDMI out, everybody likes those, right?

The guts are the same as above, except it has a 2.8″ screen and 4x zoom. The styling and button layout are different, and I can’t say for sure whether I like it. Either way, it should be a really solid camera.

I have to ask, though, what’s with the copy accompanying these things?

Immediate gratification is the pulse of today, and the PowerShot SD960 IS Digital ELPH with its streamlined appeal wastes no time at reminding you. “Here’s a camera unlike any other.” But it’s the excitement of ongoing discovery – the way this camera captures the vibrant spontaneity of the world before you – that defines the lasting rewards of the PowerShot SD960 IS Digital ELPH, and the new level of pictures and HD movies that await you. Immediate satisfaction. Day-after-day delight. What could be better?

Are you kidding me? It’s like they hired a writer who primarily does made-for-TV Christmas specials. Tell me about the goddamn camera!