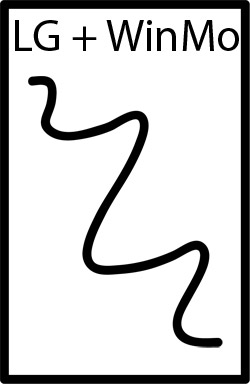 LG just agreed to a deal with Microsoft to not only include Windows Mobile on more of its cellphones, but to increase the number of cellphones it makes in order to prop up Windows Mobile. Now, depending on whether or not you’re one of those “WinMo sucks!” people, this is either good or bad news: LG makes decent phones (right?), but “subjecting” it to Windows Mobile may be seen, by some, as unfortunate.

Not that it matters: the Palm Pre is still the cool kid in class, while the iPhone is more or less fully entrenched in its position as smartphone for the masses; BlackBerry, what can you say?

LG says it’ll up its production to 26 different WinMo phones by 2012—provided, of course, that we all haven’t descended into anarchy by then. I’m fine either way.

Long-term, LG and Microsoft are pooling their R&D resources together so they can produce decent hardware to go along with decent software. (I think my artwork to the left would be a fine start for a joint logo.) You don’t want a T-Mobile G1 situation, where the hardware is so-so, while the software is amazing.