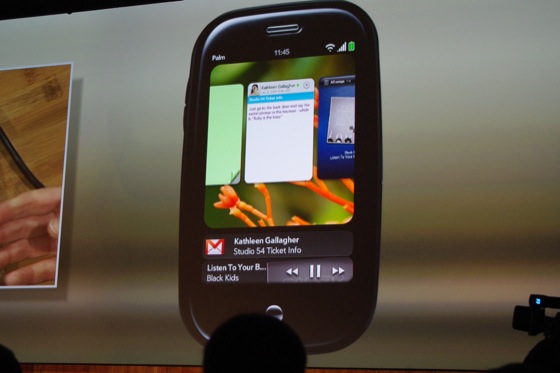 Must be nice to have just one beat obsession. Jonathan over at Precentral has compiled a nice list of features for Palm’s upcoming Pre. Kudos, Jon, kudos.

– 8gb of internal flash memory (Actually usable likely to be in the 7.4 gb range)

– Hardware keyboard, with buttons something along the lines of the Treo Pro

– microUSB connection slot (so it can be connected to your computer and used in Mass Storage Mode; also used for charging)

– GPS (Navigation likely to be limited based on Sprint coverage, at least initially. The chip should work everywhere)

– MMS support (along with SMS and IM, all threaded together, though we do not know for sure what the supported IM clients will be, AIM and GTalk are confirmed)

– Flash Support (not at launch, but within the year)

– Google, Facebook, Exchange, and LinkedIn at launch, but you can still connect to your Yahoo, Hotmail, etc, but it’ll likely have to be setup to check for new messages ever hour or something of the like

– Standard array of apps such as Calendar (a really awesome one though), Contacts, Messages, Notes, etc.

– Copy and Paste (take THAT iPhone)

– Universal Search capability (not sure how deep it actually goes though, such as the ability to locate keywords in memos or saved messages

What’s Missing (at least at launch):

– No PalmOS emulation or backward compatability, so all the old Palm apps won’t work on the Pre

– Software Keyboard (sorry folks, you’re stuck with the hardware one for now)

– Today screen (There is a pseduo-today screen, where you can see your upcoming appointments and notifications. Mark in the comments put it best: There is something sort of like this in the dash board. When you tap on the dash board to expand it the calendar shows the next appointment, email/messaging show unread messages, etc.)

-No Video out connection (bummer)

-No indicator light (that we’ve seen, though one of those lights in the gesture area might do this, but I wouldn’t count on it)

Unknown Features (we haven’t heard much, if anything about these things)

– SDK Availability, while this isn’t Pre specific, we still have no ETA on when this will be released, but we do know it will most likely be AFTER the device launches.

– Battery life (we’ve heard a lot of rumors here, and we know it’s the Centro’s 1150 mAh battery, so I’m going to go out on a limb and say with heavy use, you’ll be charging this puppy nightly)

– Visual Voicemail (not likely at launch, expect a 3rd party solution for this one too)

– Security Options are unknown at this point

– Voice dialing or recognition is unknown, but not likely

– Simultaneous voice and data usage (not 100% confirmed, but possible on CDMA version (edit: Mr. Segan has confirmed this), guaranteed on European GSM version).