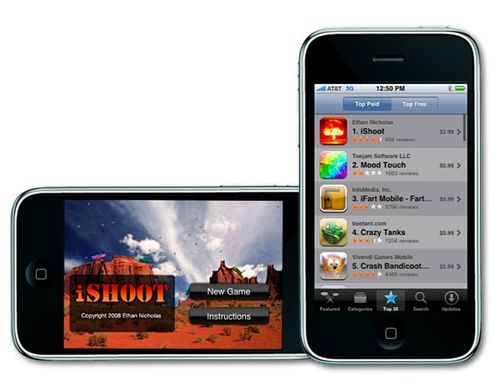 Among the millions of apps being released hourly in the App store, there truly are apps worth buying, and those that not worth wasting a glance at. iShoot ($2.99) is one of the best and brightest among its craptastic peers. One of many turn based tank fighting games, iShoot has proved its worthiness by sky rocketing into the #1 spot almost overnight, with his iShoot lite following close behind with the #1 spot in free apps. Creator Ethan Nicholas has recently enjoyed so much success from iShoot that he quit his day job in order to further his app-development career.

When I first saw this in the App store, I was relieved and happy, because, what with it being in the 2 top #1 spots, I figured someone had finally gotten tanks for iPhone right. And so I happily bought and downloaded it, synced my phone, and played it for an hour straight. My first impressions were that someone had indeed gotten tanks for iPhone right, but as I played on, I began wanting more. After playing for an hour I was left with a slightly bitter, unsatisfactory taste in my mouth. It was like I had been tricked. I felt like I had ordered a coke, and been delivered a diet pepsi. And every time I took a sip of the Pepsi, my mind anticipated the sweet, savory taste of Coke, only to be immensely dissapointed from the Pepsi, over and over again. Despite difficulty changes and different and bigger explosions, someone had tricked me into playing the same level, over and over again.

I enjoy playing tank games, don’t get me wrong. I love playing them, learning to anticipate how the missiles will arc and come streaking down upon my poor helpless enemies, but iShoot doesn’t provide the player with much of a new experience when it comes to tank games. You start out with simple weapons, build up your money, and buy bigger and better guns. But the levels drag on. Use weapons, get money, buy weapons, use weapons and so forth.

Its not fair to say there isn’t anything good about the game, it is fun, and it does hold your attention for a while but basically iShoot is just a port of one level from that tanks game you used to play in the 1990s. Sure the landscape changes from level to level, but that is just a Coke sticker on the Pepsi can. If its innovation you’re looking for here, you won’t find it in iShoot by Ethan Nicholas