At the Columbus CrunchGear Meetup in December I met Brad Dunnington, CEO of Avalinx, a local software development company that makes the PRO series of card games for the Apple iPhone. I met Brad for lunch a couple weeks later to learn more about the PRO series, as well as Avalinx as a company.

One of the more interesting things I heard at the Meetup was that Avalinx was a .NET development shop. Why, then, were they making iPhone games?! As Brad informed me, everyone at Avalinx eagerly watched the initial iPhone launch, and agreed that it represented a real breakthrough in handheld computing. They were all excited about the possibilities afforded by such a device. When the App Store was launched, Avalinx decided to get involved by writing applications that they wanted to write. The development team all had prior experience with casino game software (no names were divulged to me due, as I was informed, to contractual obligations), so writing casino games for the iPhone was an easy decision: they already had familiarity with the subject, and it was something they all actually enjoyed.

But anyone could write a card game, and Avalinx didn’t want to produce “just another card game.” They wanted to produce something of sufficient quality that it looked good on the iPhone, matching the polish and sophistication of the iPhone itself. Thus, the PRO series of card games was launched, which currently includes 21 PRO, Baccarat PRO, Let ‘Em Ride PRO, and 3- and 4-card poker. The latter three games were all announced after the Meetup. Brad informed me that on average, they’re working on 4-6 week development cycles for the PRO series games.

Rather than review the games individually, I thought I’d look at these games as a collective, and examine the ways in which they stand out from their competition. 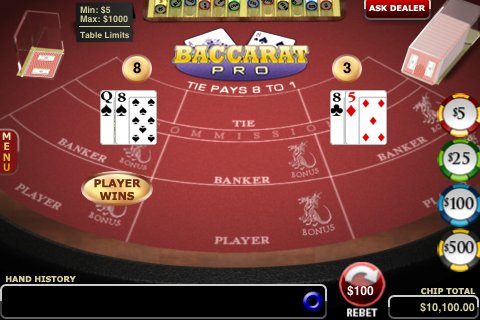 The graphics for all of the PRO series games are superb. Playing a game gives you pretty much exactly what you’d see at a casino table playing the same game in real life. The shoe contains the proper number of cards, and when you exhaust the shoe you need to wait while the dealer shuffles and refills the shoe.

The sounds aren’t spectacular, but they’re not jarring either. The most noticeable sound is the shuffle sound. You’re not losing anything if you turn off sound while you play. 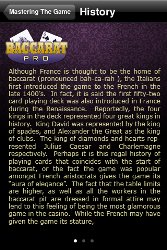 Baccarat, as everyone knows, is the game James Bond plays. Beyond that, I don’t think many people actually know how to play. I certainly didn’t. Here’s where the PRO series of games sets itself apart from other card games. Each game includes a comprehensive history of the game, explaining the origins of the game as well as modern derivations and common house rules used by casinos today. Whether you want to be able to speak intelligently at a Vegas casino, or just impress your friends, the history of the game is something many card game apps don’t provide. It’s not something you’re going to re-read often, but it certainly does improve the overall value of the apps.

Not only does the PRO series of games provide a history of each game, but a detailed strategy guide is also included, to help you master the game. Baccarat, for example, may seem like a simple matter of luck, but savvy players will look for runs of cards to help them make their next bet. The strategy guide helps you identify such runs, and gives you a leg up on how to bet. 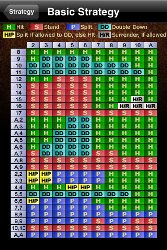 The 21 PRO strategy guide includes a comprehensive chart of when to stand, when to hit, as well as when to split, surrender, or double down.

Also included in the 21 PRO game are the basics of card counting, including naming books from which popular card counting strategies were gleaned, so that the dedicated player may seek out additional resources. That’s a nice touch, if you ask me. The first page of the card counting strategy specifically states “Card counting is not illegal, as long as no external device is used to assist the player. However, players who excel at it may be asked not to return to the casino, since his or her business is no longer welcomed.”

It’s clear that the PRO series of games, while perfectly adequate for the casual card player, are excellent choices for those seeking to improve their game. 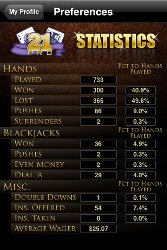 The PRO series games keep a detailed history of your games, and you can use this data to improve your game. I’m not particularly good at 21, as evidenced by the screenshot here, but using this information will help me hone my betting strategy, and learn when to be more aggressive and when to be more conservative. I’ve learned from 21 PRO that it’s a good thing I didn’t go to CES with the rest of the CrunchGear crew: I would lose a lot of money in Las Vegas.

As Brad reminded me in an email, “The odds ALWAYS favor the house.”

When playing you can always press the “Ask Dealer” button at the top right. This will tell you the recommended action, which is based on the strategy information provided by the game. It’s usually the “safe” option, which may or may not be what you have in mind. Just asking the dealer every couple of rounds helps you check your strategy, and hone your decision making.

Updates and Advertisements
At the bottom of the home screen for each game is a small area for live updates. Currently this is used to announce new releases in the PRO series, so you don’t need to visit the Avalinx website or search the App Store for new games to play. Brad only smiled when I expressed the obvious fact that the space could be used to announce all sorts of things perfectly targeted to the audience. Everything from travel deals to Las Vegas (or other casino locations) to tournaments and more could be announced.

Similarly the advertising-sponsored free version of 21 PRO can enjoy a pretty high degree of ad focus, since it’s a reasonably safe bet that people playing casino games on iPhones will be interested in casino- and gaming-related advertisements. I haven’t looked at the free version of 21 PRO, but I’d be surprised if ads for shampoo or cat litter were displayed.

Bottom Line
Each of the PRO games costs $5, which isn’t a bad price at all for someone genuinely interested in the game. Even if you’re not planning to use the games to prepare for your next trip to Vegas, the visual quality and wealth of game information make these a true value. If you’re a card player, check out the PRO series.