Noel Hartshorn (left in the picture) is a 37 year old Wales (UK) based iPhone developer, working in partnership with illustrator Dennis Harrison (on the right). Formerly a contract technical writer, Noel became one of the many casualties of the global economic crisis. With the IT contract market in decline, and with a lot more time on his hands than anticipated, Noel decided to take the plunge into iPhone development. This is his story.

(Editor’s note: the app they developed is called i-Doodz. Noel decided not to include the name of, nor the link to the app in this piece, but we add it because it deserves some credit at least) 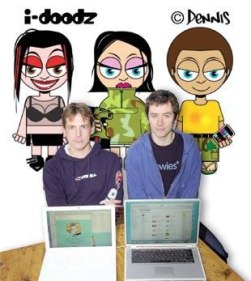 It is now 4 months and 24 days since my contract as a Senior Technical Writer with a large PC manufacturer was terminated; a result of “streamlining”, “resource rationalization” or whatever the currently favored term for “axe wielding” is.

4 months and 24 days of energy sapping job hunting, wondering when the next significant income will present itself, and doing everything possible to avoid being a statistic and a burden to the welfare system.

It is 2 months and 6 days since, over a few bottles of budget beer, illustrator Dennis Harrison and I had an idea for an iPhone application that would surely leave other developers in awe, and the global iPhone community screaming for more. This was it – the solution to our financial woes – we’re going to make millions! All we need is a little bit of money and a good iPhone developer.

It seems the world is full of iPhone developers offering their services, and they cost a lot more than our budget would stretch to. When the quotes came in, realization dawned – we’d have to do it ourselves. The fact that I hadn’t programmed anything more than a website in over 15 years was only briefly considered, and I invested the profits from selling a beloved surfboard on eBay in a few iPhone development books. Dennis in the meantime got to work on the illustrations that would be the focus of our app – a slightly off the wall character designer and e-card sender.

At this point we had read a few App Store Cinderella stories, and decided to file them under “unachievable”. In the “possibly achievable” file were the accounts of a plethora of developers who are making a little pocket money from their efforts, maybe even a modest income. With expectations lowered, if that is all we would end up with, it was still worth doing. Slightly more income than nothing is, undeniably, more than nothing.
The development process was relatively straightforward. My rusty skills quickly caught up with modern programming concepts, or at least enough to achieve our goal.

Within 5 weeks our app was complete, and we began the process of enrolling in Apple’s iPhone Developer Program in order to get our app listed in iTunes for the world to see and, hopefully, buy. At this point, many iPhone developers would expect to read a tale of misery and woe, but for us the process was, in all honesty, a walk in the park. Our app went on sale on January 16th 2009. Then the real hard work began.

The iTunes App Store is a weird, wonderful and ever-changing beast. If a developer launches an app and leaves it alone expecting it to earn money, it won’t. Making money is an ongoing and often demoralizing effort, largely involving trial and error. First of all, how much should an app cost? Should it be free? (Not if we want to feed ourselves). Should it go for the cheapest price point of 59p? Such a tiny amount belittled our efforts, and grouped our software with the “pull-my-finger” apps that are the scourge of iTunes, but which are, for now at least, remarkably (although spectacularly disappointingly) successful. After spending 25 minutes developing our own pull-my-finger app to fit into that particular market, we eventually settled on £2.39 for our main app, which to us seemed a snip whilst also reflecting our hard work and maybe, just maybe, allow us to consider ordering curry sauce with our chips. Playing with the price of the app was interesting – changing it made little difference to daily revenues. The trade-off was the number of daily downloads.

Next, the tried and trusted Lite version strategy. Tried and trusted?! Despite the description of our no-cost Lite version stating its inadequacies, it received the apparently to-be-expected “needs more!”, “is that it?!” and “it should have….” comments. It seems all apps should be free and make you cups of tea whilst implementing global peace and eradicating Third World debt. Our Lite version does none of that. It simply provides a taster of the paid version. Apparently, this was naïve.

Updates. This is proving to be an important aspect of promotion. Every time an app is updated, it goes back to the top of the “list”. We’ve just launched our third update. Some developers have released 20 updates to their app in the same space of time. Note to self – make sure there are more typographical errors in the next app.

Final strategy – market, market, market…with neither marketing experience nor budget. The Internet is awash with iPhone app “review” sites, none of which bear any resemblance to an iPhone app review site; merely providing data extracted directly from iTunes, presented in a less friendly manner. Many long days of blogging, emailing, pleading and gazing at the screen wondering who to contact next have, however, resulted in a handful of good reviews. Whether these have any effect on sales or not is impossible to tell.

All this effort to promote our software is having two effects; I am no longer aware of what is going on in the world, and people are slowly starting to buy our app. Whilst we’re not mentioned in the Top 100 apps in our chosen category, we are starting to make money – almost enough to provide us with a basic salary each. With the continued effort, the gradually increasing number of good reviews, and a new themed version launching imminently, we’re looking through rose tinted spectacles at the possibility that we can soon stop searching job sites for a 9 to 5. Moonlighting, however, may be required.

Our experience has shown that jumping on the App Store bandwagon is relatively easy. Staying on it, sticking with it and reaping the benefits are a whole different ball game. There are at least 15,000 iPhone apps listed in iTunes. For every big winner there are hundreds of underdogs. For every little gem there is a wall of “fart apps” obscuring the view. For every single app there is at least one developer hoping they have guessed this week’s gimmick correctly.