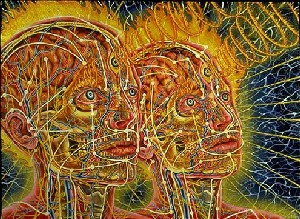 Researchers at the University of Toronto have put together a new technique for coarse determination of thought processes and preferences. It involves a headband set to detect near-infrared radiation, which is apparently emitted by the brain in areas of activity — it has to do with oxygen activity and blood flow. The technique can’t be used to tell if you prefer Coke Zero over Pepsi One (I don’t), but it can be used as a rudimentary choice-making device.

Some similar-in-concept devices are being pitched as game controllers, but they’ve had little success so far. The execution is different, but the idea is the same: supercortical pattern detection.

The headband doesn’t detect what you’re thinking — nothing can do that quite right, and anyway this thing only detects activity on a large scale. Close your eyes and move your head around. Try it, we won’t laugh. Notice how you can tell where the window is, where the screen is, where it’s dark, but not exactly? That’s the kind of precision we’re talking about.

Patients are trained to think of something that lights up a certain area of their brain — a strong memory, a song sung in the head, or a particular image — and this is picked up by the sensor and the patient can decide whether that’s a “yes” or “no” answer. That’s about the limit of things, but consider that it can be used by someone with absolutely no motor control in their body, including eyes and mouth, often the last resort for getting information through. Being able to say “yes” and “no” may sound basic, and it is, but it’s the basic things we take for granted. Hopefully this relatively straightforward and inexpensive method of thought detection will see a rollout sometime soon in hospitals and long-term care facilities.