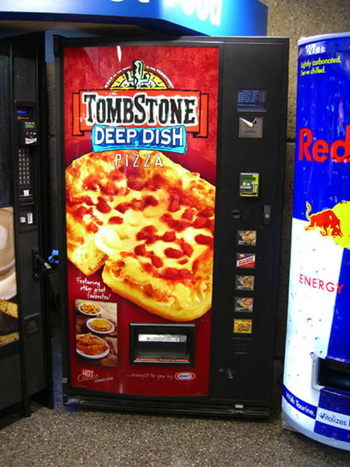 Let’s not split hairs: the United States of America is an awesomely fat country. A full 26 percent of Americans were considered obese in 2007—by 2048 nearly every single American (statistically, at least) will be obese. We’re not even talking about “yeah, I can stand to lose a few pounds,” but medically obese. And this is just a guess, but could things like this be part of the problem, a pizza vending machine?

Now, admittedly, pizza isn’t the worst offender when it comes to fast food—it’s no Big Mac or Whopper or anything—but would it be too much to ask for, I don’t know, a salad vending machine? Why is it that the food we have on demand is complete rubbish?