In light of recent reports of sexual predator growth on Facebook and MySpace sites, we wanted to mention start-up YouDiligence.com, a service launched late last year that alerts parents and educators to questionable content on Facebook, MySpace and other social networking websites. The company says that business has been exploding since MySpace recently cooperated with Connecticut Attorney General Richard Blumenthal to hand over the names of 90,000 registered sex offenders that were identified and blocked by the social networking site.

Here’s how it works: When a child (or one of their friends) post inappropriate or questionable content on their page, an email alert is sent to the parent. A pretty comprehensive report is also stored on the user’s dashboard. Reports include time, the inappropriate words used, the context of how the terms was used, where it was posted (i.e., on a profile page, caption, wall comment, or if child writing a comment on someone else’s page) and a link to the exact URL.

From a business model point of view, YouDiligence has had a few hiccups. A paid service, YouDiligence had slow growth after its launch and recently rolled out a 30-day free trial. The cost of the service ranges from $9.99 a month to monitor one child to $19.99 to monitor four or more kids. The company reports that it has seen sign-ups increase since the implementing the free trial. YouDiligence also started using retargeting start-up Fetchback to get customers back to their site. So far, they have a re-subscription rate of 95 percent.

YouDiligence’s technology does has have overlap with competitors in the child internet monitoring space, including ReputationDefender and Sentinel Safe, who partnered with MySpace to find the sexual predators in the social networking site.

Despite the competition, YouDiligence provides a valuable service in a marketplace that can be unsafe for young children. 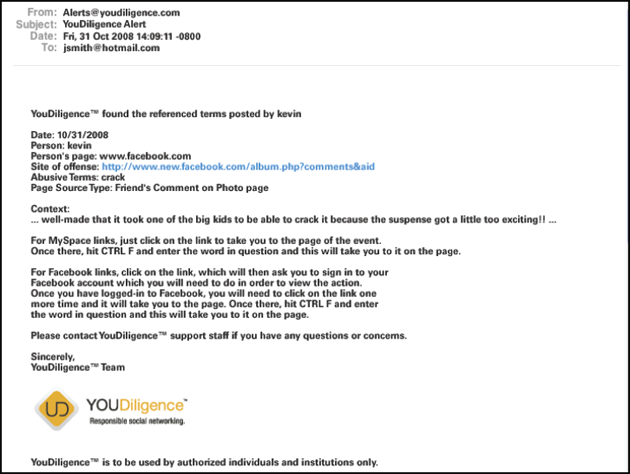 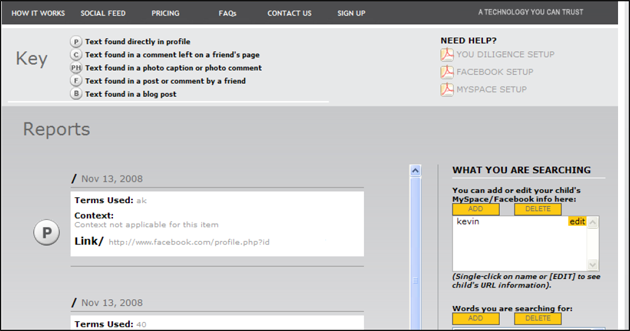