The rebirth of the Sidewinder brand is, I think a good thing for Microsoft . Their flashy, chunky game gear is functional and actually different — witness the X5 mouse, big enough for a Kodiak, and its upcoming big brother the X8, which looks even bigger. I was pumped to check out their new keyboard, and while it’s not exactly suited to my style of play, I can see it being very useful for a lot of gamers out there.

I’ll leave most of the details for the video to explain, but in general this thing accomplishes what it sets out to do. The macro keys work well and the profiles are easy to switch between, although I’m not much of a profile-and-macro guy. The dials are big and turn smoothly. The detachable bit comes off and goes back on without any trouble, although if they could have made it wireless and recharge via the connection, that would have been even more excellent.

One thing that I didn’t cover in the video (when the camera ran out of power, the clip I had shot of this disappeared) is that it’s not quite as solid as it looks. The center of the keyboard tends to give under pressure, so it bends inward. Not good, but it doesn’t happen when you just touch a key normally. It looks more solid than it is, essentially — it doesn’t have the vigor of a SteelSeries or the finish of a Razer, it feels less like performance hardware than either, but you can’t argue with the functionality.

Another issue is that there are no little “feet” to prop up the keyboard. My guess is they couldn’t get tilt to work with the detachable part. So if you’re someone who really needs your keyboard to be tilted towards you, this is definitely a no go. 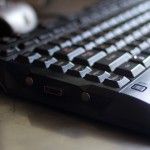 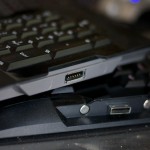 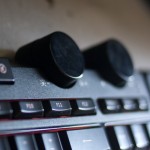 Other than those two issues, it’s a solid keyboard. For around $60 it’s not even too expensive, which has been an issue with Microsoft hardware lately.