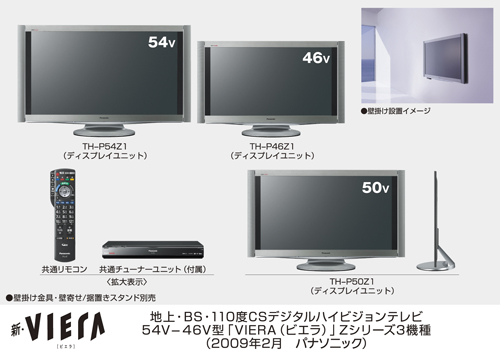 Panasonic has announced [JP] that on April 20 it will roll out  the world’s thinnest plasma TVs in Japan. The company said it plans to release them at about the same time around the world (which remains to be seen). The TVs are measuring just 24.7mm in the thickest section.

The company also promised their new Vieras consume half the power of previous models and offer higher resolution at the same time. Panasonic used separate displays and tuners in the TVs, which can be connected wirelessly to transmit HD video (1,080p) without compression. According to the company, this is the first time wireless HD-based digital equipment becomes a reality. It uses the 60GHz millimeter wave band.