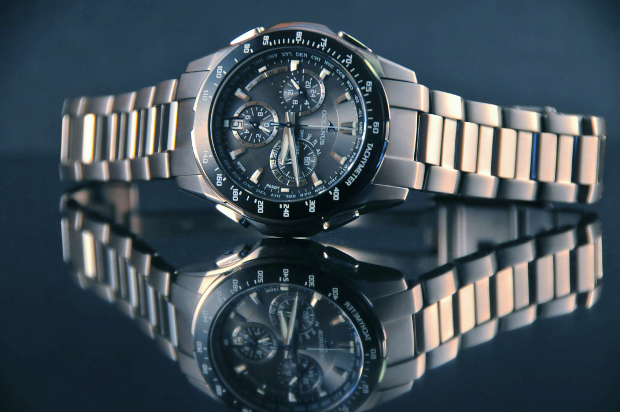 Casio has an image problem in the US. Known as a great source of cheap digital watches, sometimes people forget that they also have a line of high-end models as well. When you say Casio people usually think of the G-Shock, or the often-mocked Databank. They think geeky, not classy — but Casio does both.

Personally, I prefer analog watches. Digitals are great, they are accurate, but they have absolutely no soul. I’ll take an analog that loses a few seconds a week, but has some personality, over a square black digital any day. And while it might be a bit of an anachronism in this day and age, I prefer to wear a watch over checking my phone for the time.

My current daily wear has been a Citizen Navihawk, but the Oceanus might just be replacing it.

Functionality
Casio has really pulled out the stops on the Super Chronograph. It’s light, the crystal is extremely tough, it’s astoundingly accurate (since it syncs itself every night with the atomic clock), you never have to replace the battery and it’s got personality. The case design also features some subtle electric blue accents. The logo on face is blue, the base of the hands are blue, and there’s even a thin blue line of metal right between the chapter ring and the bezel. It’s light, and very comfortable. As far as functionality, you’re really not losing anything with this watch. As with most high end digitals, the Super Chronograph has a stopwatch, countdown timer (both using the additional second hand) an alarm, and world timezones.

What I liked
Since the case and band are made of titanium the case has almost no weight to it (99 grams according to Casio), and the fit is extremely comfortable. One of the most remarkable things about the entire Oceanus line is that they’ve put in some seriously geeky features, but still keep that style that you’d see in other high end watches like Tag Heuer or Seiko.

What I didn’t like
There are couple of issues that came up with the Super Chronograph. As a word of warning, do not expect to be able to just pick this thing up and use it. It’s not like any other watch with this feature set. You will need to read the manual to figure out how to set the time zone, and adjust the other features to your needs.

I also had some issues with the band. I took it to my favorite jeweler to have it adjusted, and it took him about 15 minutes to get the band size changed. Also, the illumination on the hands is a bit weak. While initially it is extremely bright it fades quickly, and after about 15 minutes is difficult to read. This is surprising since I’ve owned other Casio’s that had no problem with the hands staying bright for hours.

In conclusion
If you’re a watch lover, go find a local jeweler that carries this brand. You might have some trouble finding them, but it’ll be worth it for a comfortable, high quality watch that delivers some very nice features. Expect to pay about $900.