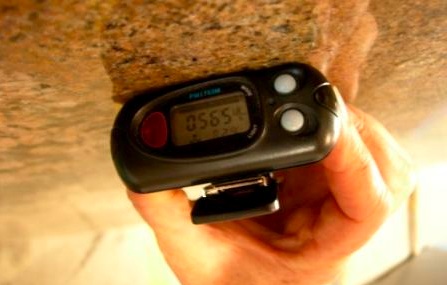 It’s fairly well known that granite contains trace amounts of radioactivity. Most are harmless but there are situations where your fancy granite countertop contained uranium in as high a concentration as in uranium ore. That’s just nasty!

Linda Kincaid tests granite for homeowners and has often been kicked out of the store for testing slabs.

A San Jose, CA showroom manager told me last August, “This is all propaganda from Silestone”. When I showed him radioactive Niagara Gold granite in his showroom, he insisted, “a sealer will take care of it”. As few minutes later, an assistant asked me to leave the premises.

I was back in that San Jose showroom a few months later, scanning granite for a client. The showroom staff kept me waiting nearly two hours. First, they said they had no record of the client. Then they said they could not find his granite. The manager was quite rude and seemed to prefer losing a customer, rather than allow an industrial hygienist to scan his granite.

A sealer, eh? Hopefully that sealer is made of lead.