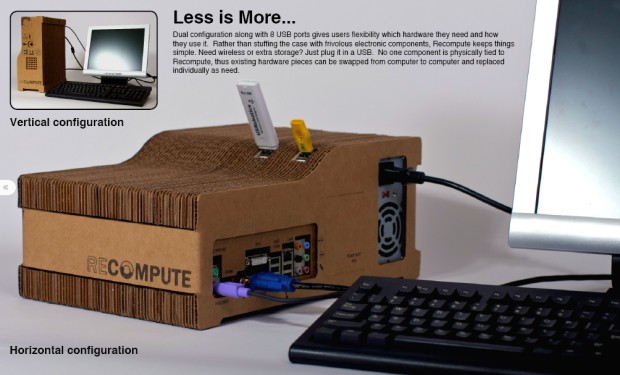 This concept for, essentially, a cardboard box you put your PC components in, is designed to be a replacement for the tower cases that end up sitting in landfills when you upgrade. I appreciate the idea, but I’m afraid they’re tilting at windmills here. Like Asus’ bamboo laptop, this is a mere shell of eco-friendliness.

For one thing, I’m suspicious from the first because of their labeling of the DIMMs as “RAM memory,” a computing gaffe along the lines of “PIN number,” but less accepted. Next, the corrugation supposedly works as a vent for heat to escape. In fact, it is more likely that the heat would be absorbed as it goes out what are essentially innumerable paper straws. Without clear exchange points driven by fans, the thing would act like a big oven mitt. And what is the motherboard screwed into? Where’s the buffer space?

Next, the configuration double-talk:

What does that mean exactly? “Frivolous electronic components” — like hard drives and wireless cards? “No one component is physically tied to recompute” — like any other computer? 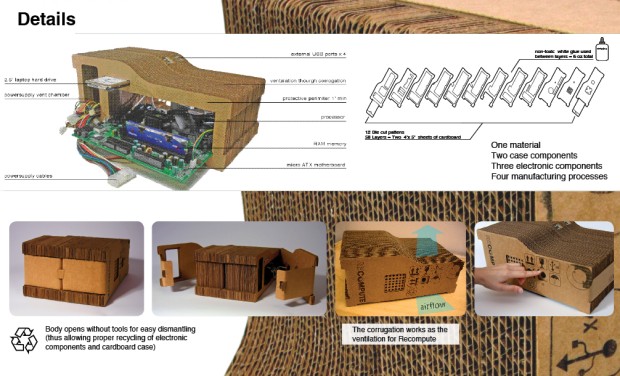 Consider, also, that this cardboard would degrade much faster than, say, a full-steel case like this one. If you pour coffee onto it, not only does it pour right onto the components (ventilation!) but it soaks right into the cardboard. The ends are single-layer, so if they get kicked, they’re busted. You’ll be buying a new one of these every couple months, while a normal case could last for years.

In the end, what they’re doing is making more green the one part of the computer that probably doesn’t need to be greened. The components inside are all plastic, silicon, metal, and rubber, and they make up 90% of the mass of the thing. I’m all in favor of making things more eco-friendly, but this is barking up the wrong tree, so to speak. How often are cases replaced? Maybe one per year per person.

We should be focusing on consumer education and making sure every electronics place has a cheap or free recycling option. I hate to seem so bitter about this little case that had such good intentions, but right now this is the exact opposite of what we need.