Online file storage startup Box.net has unveiled a redesigned interface, introducing a number of new collaborative features in an effort to appeal to its new target audience: businesses and the enterprise. The site will continue to offer the same storage solution it has for years, but is looking to capitalize on businesses – the kind that are actually willing to pay – that have grown to become the site’s most frequent users.

Box.net launched back in 2005 as a fairly basic online storage site, and has continued to add functionality since then, introducing new features like a two-way storage widget, a platform that integrated a number of popular web applications, and a Facebook application that CEO Aaron Levie refers to as an “interesting effort”.

Over time, Levie says that the company found that its most avid users were businesses – a fact that became increasingly apparent when Box.net introduced collaborative and enterprise features that allowed teams of coworkers to quickly share files with each other. In light of this trend (and the fact that these companies actually pay for the service), Box.net is working to make itself better optimized for a group work environment.

First and foremost, users will notice a revamped interface. Each directory now includes a sidebar indicating which files have been recently modified, along with a listing of other members who have been working on the files. The site also now gives every user their own profile page, which presents standard contact information, a news feed of recent activity, and a list of common collaborators. Other new features include the ability to add discussions and bookmarks to folders, offering a level of communication beyond just file sharing.

The upgrades introduced today certainly emphasize the site’s shifting focus to collaboration, but I feel as if the new social aspect is missing a few key features (for one, I’d like to be able to send a direct message to one of my collaborators without having to include it as part of a general discussion). But Box.net is walking a fine line between maintaining the simplicity its users have embraced and building a full-blown file sharing social network (which it probably doesn’t want to become), so any further changes will likely be gradual. Still, don’t be surprised if we see some more collaborative features added in the near future. 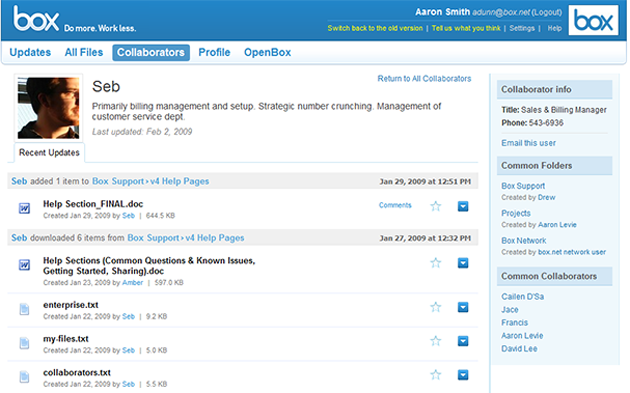