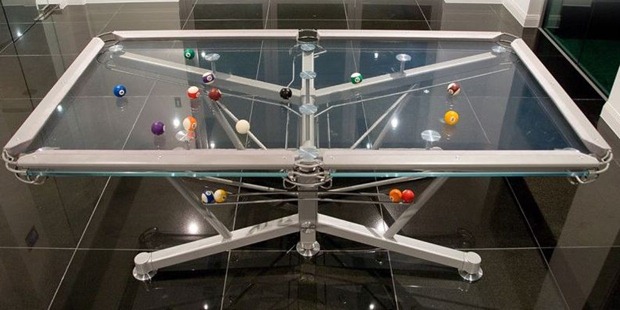 If you’ve been cursing the standard felt and slate pool table concept ever since you started playing, perhaps it’s time to consider the G-1 Glass Top Pool Table from Australia’s Nottage Design. It’ll only set you back a little over $25,000.

That’s assuming there’s a US-based dealer around somewhere, as I can imagine shipping a big, heavy pool table from Australia might call for something a bit more series than Fedex Saver rates. Let’s cross that imaginary bridge when we come to it, though.

If you do happen to have the coin for this table, you’ll get some pretty tricked-out features; most notably, the magical (and patented) “Vitrik” playing surface that mimics a felt-covered table. And instead of slate, you have “toughened glass” that’s apparently four to six times stronger than conventional glass. Here’s a video of the table in action: