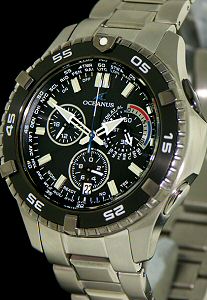 While Casio is considered to be a higher end watch company in Japan, they sometimes have image problems in the States. Better known for their G-shock and calculator watches in the US, their Oceanus line is sometimes ignored by higher end retailers. This is a shame really, since the line has some features not even found in the likes of Tag Heuer and Seiko.

Casio announced recently that they are adding a new watch to their Oceanus line, the “Cachalot”. There’s not a ton of information out there about it yet, but based on what we know about the rest of the Oceanus line, it’s probably safe to say that it syncs with the atomic clocks, is solar powered, and has a sapphire crystal.

Retail pricing is expected to be in the $1,200 range. No word on availability yet, however it’s been out in Japan for several months.