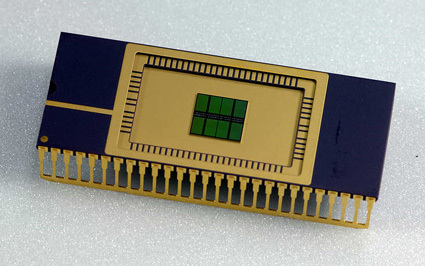 Samsung has developed the first 4Gb DRAM chip in the world using the 50nm process. These 4Gb DDR3 chips will use 40 precent less power than previous 2Gb chips. They will bring higher efficiency to enterprise server RAM and consumer RAM. The higher capacity will allow for 8GB unbuffered DIMM modules for desktops and 8GB SODIMM modules for laptops.

Other companies will probably be either licensing or researching this technology soon, but let’s have a round of applause for Samsung. Well done, old friend.

If you want to read all the technical stuff, here is the press release:

With more and more data centers seeking a reduction in the number of servers they use, the development of low-power 4Gb DDR3 has become critical in reducing data center costs, improving server time management and increasing overall efficiency.

For the new generation of “green” servers, the 4Gb DDR3’s high density combined with its lower level of power consumption will not only provide a reduction in electricity bills, but also a cutback in installment fees, maintenance fees and repair fees involving power suppliers and heat-emitting equipment.

“We have leveraged our strength in innovation to develop the first 4Gb DDR3, in leading the industry to higher DRAM densities,” said Kevin Lee, vice president, technical marketing, Samsung Semiconductor, Inc. “By designing our 4Gb DDR3 using state-of-the-art 50-nm class technology, we are setting the stage for what ultimately will result in significant cost-savings, for servers and for the overall computing market,” he added.

The 4Gb DDR3 can be produced in 16 gigabyte (GB) registered dual in-line memory modules (RDIMM) for servers, as well as 8GB unbuffered DIMM (UDIMM) for workstations and desktop PCs, and 8GB small outline DIMM (SODIMM) for laptops. By applying dual-die package technology, this new device can deliver modules of up to 32GB – offering twice as much capacity as memory modules based on the previous highest chip density of 2Gb.

Designed to be low-powered, the 4Gb DDR3 DRAM operates at 1.35 volts (V), therein improving its throughput by 20 percent over a 1.5V DDR3. Its maximum speed is 1.6 gigabits per second (Gbps).

In 16GB module configurations, 4Gb DDR3 can consume 40 percent less power than 2Gb DDR3 because of its higher density and because it uses only half the DRAM (32 vs. 64 chips).

With an aggressive conversion to 50nm-class production for higher density DDR3, Samsung intends to remain the clear leader in high-volume/high-performance DRAM.

As forecasts have the amount of memory per server doubling every two years, the development of high-density DRAM is expected to keep pace, expanding to other applications such as notebooks and desktop PCs.