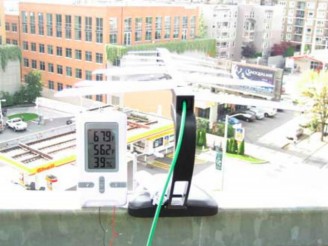 Intel researchers in Seattle were able to set up an antenna, point it at a local television tower, and gather enough electricity from the airwaves to power a digital thermometer. On the surface, this may not sound like much, but when you think about it, that’s the power of a AAA battery sucked right out of thin air.

While several companies at CES 2009 were demonstrating a short distance version of this technology, Intel’s goal is to make something that works over a much greater distance. The experiment in Seattle proved that this is possible, however it looks like it may still be years off due to problems with power loss and wattage over a distance. Definitely a technology worth watching.