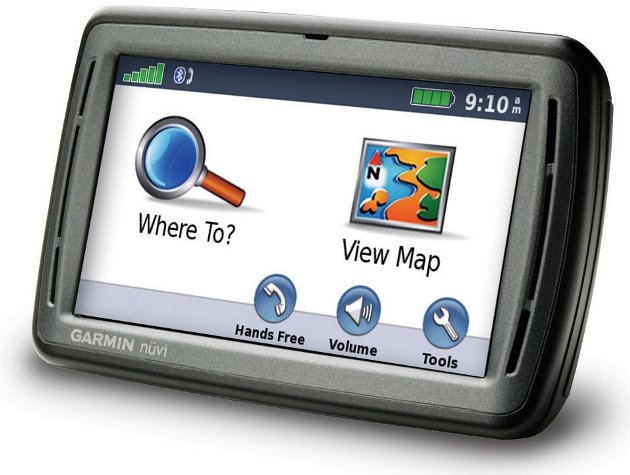 When I received the Garmin nuvi 880 for review, my initial reaction was a lackluster “Oh great, another GPS.” As usual, I opened it up and started using it without reading the manual. After using it for a few days, I hadn’t really changed my opinion. After reading the manual, though, and really taking advantage of what this GPS offers, my tune changed considerably.

At first blush, this is like just about any other GPS unit. You tell it where you want to go, and it tells you how to get there. The nuvi 880 supports driving, biking, and pedestrian modes, which I found interesting. It’s not exactly easy to switch between modes as you navigate through the menu to the settings, but it’s neat that you can do it at all. I used the walking directions a couple times around my neighborhood, and it did a fine job. I imagine this would be a tremendously handy feature on a trip to a new city.

Voice Commands
The big feature of the nuvi 880 is that it can be operated almost entirely through voice commands. In the package is a little widget with two buttons, one large and one small. Pressing the big button tells the nuvi 880 that you want to start speaking commands to it. Pressing the little button tells the nuvi 880 that you’re done speaking to it. In my experience, there was little occasion to actually press the little button, as the GPS will eventually stop listening for new commands after a period of inactivity.

I was reasonably impressed with the quality of the voice detection. Speaking main menu items was easy, and the unit did a fine job of recognizing street names that I said aloud. I found it very natural to speak the commands, and it’s definitely a much easier — and safer — way to use the GPS while driving.

I was initially disappointed with the little widget to activate voice commands. I long for the day when we can simply address our computers like they do on Star Trek. Until then, we’re stuck using some gadget to tell other gadgets that we want to talk to them. The widget for the nuvi 880 wasn’t intrusive, and it comes on a nice little strap. Simply wrap the strap around your steering wheel, and then you can activate the voice commands with a surreptitious press of your thumb.

Overall, I think the voice commands are a great addition to a GPS unit, and I look forward to continued innovation in this area.

Audio Player
The nuvi 880 provides about a gig of storage, and is seen as a plain old removable storage device by most computers. You can simply drop MP3 files into the Audio folder, and then listen to them using the built-in Audio Player (not to be confused with the Audible Player, which is strictly for Audible.com audio books).

The audio player reads id3 tags, and provides a functional mechanism to navigate your audio by file name, artist, genre, etc. Playback controls are a little rigid, as I couldn’t find a way to easily fast forward or rewind within a playing song.

I didn’t find the volume to be great, but that may have been largely due to my selection of MP3s. Rather than load up music, I loaded up a number of episodes of EscapePod, my favorite sci-fi short fiction podcast. Were I listening to music, I might have been content with merely adequate volume and audio quality. But listening to the podcasts, I found myself struggling to hear all the words of the story, and sometimes the sibilants weren’t played well.

I tried, briefly, to use the nuvi 880’s built-in FM transmitter to send the audio output to the car’s radio, but I didn’t have any luck finding a station that worked.

When the Audio Player is active, it places an icon on your map display, allowing you quick access to that feature without having to navigate through the main menu. This proved to be a handy shortcut on several occasions. The voice commands made it even more convenient. It was super easy to access new songs and start and stop playback.

Pictures
One of the neat features of the nuvi 880 is support for geotagged photos. You can load up a geotagged photo and then ask for directions to that location. You can find geotagged photos using http://connect.garmin.com/photos. I found the photo of the Kewpee Hamburger building in Lima, OH: 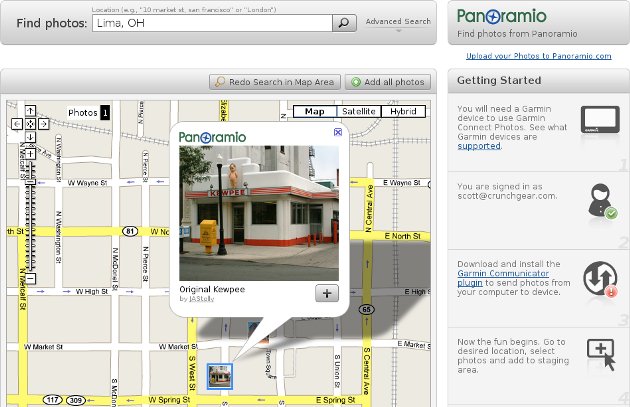 Navigating by photo is a little awkward. In the “Where To” menu, there’s no Photo option. You can access your photos from the Favorites option, but that isn’t entirely intuitive, since the photo isn’t necessarily a favorite destination. Otherwise, select “Tools” and then “Photos”. Select a photo, and a “Go!” button will become available. Select this and the nuvi 880 will plot a course.

I couldn’t find any way to string together multiple photos, as one might do were they taking a walking tour of a city. The Route planning feature of the nuvi 880 does not seem to support photos. So the photo navigation seems to be for a single destination only.

Geocaching
One of the extras available at the my.garmin.com site is geocaching. I have a couple of friends who have been into geocaching for many years, but it’s not something I’ve ever done. So I was eager to load up a few geocache coordinates and see if I could find them. The Garmin website makes it easy to locate caches and to download them to the nuvi 880. 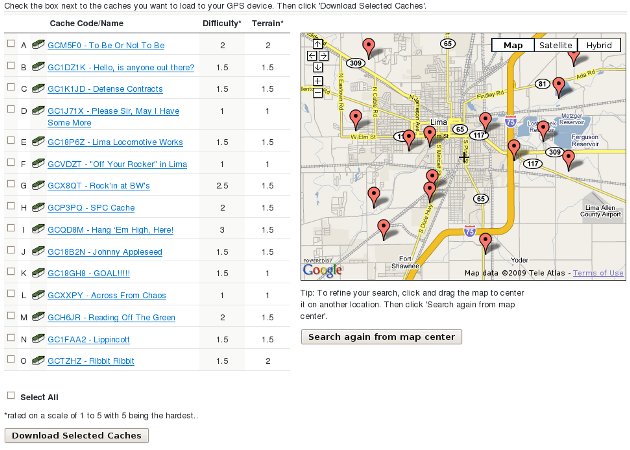 Unfortunately, there’s no “Geocache” option anywhere in the menu. Searching for “geocache” in Garmin.com’s knowledge base didn’t produce any results, either. As near as I can tell, you can use the Garmin site to find coordinates, but then you’ll need to manually key them into the “Coordinates” option of the “Where To” menu. Downloading coordinates directly to your nuvi 880 doesn’t seem to actually do anything.

Complaints
As with the other GPS units I’ve reviewed, I found the interface to be sluggish and sometimes frustrating. The voice commands help work around this quite a bit, and I find myself being more patient when using voice commands. Maybe this is because I’m usually doing something else — like driving — so the whole of my attention isn’t focused on the response times.

Satellite acquisition was slow. It was really slow when using the unit solely on battery power. This may be a problem when trying to use the pedestrian navigation mode.

The voices on the nuvi 880 are pretty weak. I found the faux Australian and faux British accents to be the best to listen to, but even they weren’t that great. Jill, the American English voice, was just plain bad. Maybe reviewing the Mio Knight Rider GPS spoiled me.

In addition to underwhelming voices, I was disappointed by the pronunciation of many streets. I’ll forgive the voice synthesizer for mispronouncing “Bellefontaine”, and even “Olentangy”, but there’s no excuse for mispronouncing “Buckeye”. The latter is a simple word. It’s the name of a tree, and the symbol for the largest university in the U.S., so I was really disappointed when it was mispronounced. I can only imagine how pronunciations would be butchered for the many Native American inspired street names throughout the Ohio region.

My final complaint against the voices is the inconsistency in speaking numbers. For I-270, the nuvi 880 will say “Eye Two Hundred Seventy”. But for SR-315, the nuvi 880 will say “Ess Arr Three One Five”. Why does it say the whole number for one, but just the digits for the other? Does anyone in the real world actually say “Two Hundred Seventy” when speaking the name of an interstate or highway?

As indicated above, you can play MP3 files directly from the nuvi. I’ve already remarked on the volume and sound quality, which are shortcomings I can live with. But listening to an MP3 and getting directions at the same time needs some work. The volume of the currently playing song is turned down so that the directions can be said aloud. Were I listening to music, I could probably live with this; but I was listening to a podcast and the voice overlay caused me to miss significant story points. I would prefer to have MP3 playback paused entirely while navigation directions are being delivered, and then simply unpause the MP3 when done. I didn’t try the Audible Player, so maybe that function does pause playback. The assumption, though, that only music files will be played through the Audio Player seems a poor one.

Conclusion
I didn’t give this unit a fair shake when I first got it. Sure, it is “just another GPS”, but it’s a GPS that offers a lot of nice features. Voice commands, photo navigation, and support for MSN Direct real-time status updates for traffic, gas prices, and more make the nuvi 880 a very useful gadget.