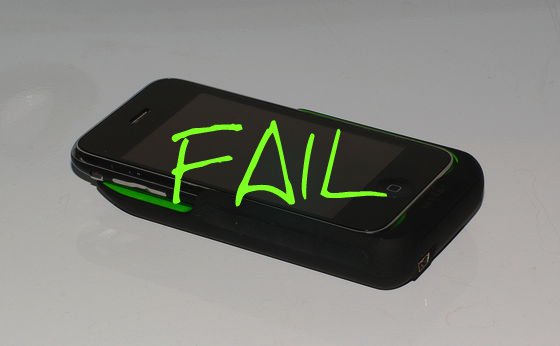 I’ve never felt so dirty in my entire life. I gave the Mophie Juice Pack nothing but praise last year and now I feel used and abused. It shouldn’t surprise me, really. The first review unit that was sent to me basically broke after a few hours. It managed to recharge my iP3G once and then failed to do so ever again. I assumed it was just a faulty unit that wasn’t caught during a QA check. But now I see the light.

The Juice Pack isn’t completely useless. It just won’t charge my iP3G unless it, too, is plugged into a power source, which defeats the purpose of having the ‘backpack’ around. I’ve tried ‘fixing it’ by cleaning off the port and letting it charge to 100 percent but neither have worked. John has one and his seems to be fine. I only bring this up since I’ve had two break on me and thought you should know. Has anyone else encountered such a situation?

In order to give publications the opportunity to review products as early as possible, we produced a small quantity of product as “review samples” only. This small production run resulted in a greater than normal rate of defect, which was the result of a safety mechanism being calibrated to be too sensitive and causing units to shut off at higher (but normal) operating temperatures.

This problem was caught early and was immediately resolved before units were shipped to retailers or end users. Here at mophie, we are very confident in the product we have produced and have taken the time and resources to create the most useful, safe and reliable product possible. We stand behind this statement with a warranty that covers the product from defect for up to one year. Our customer service team is always available to talk to customers and handle any product related questions they may have.