mEgo, a startup that lets you create a portable Flash-based avatar that includes aggregated content from your social network profiles, has closed a $2.5 million funding round. The site has also announced that it has reached its 1 millionth registered user since launching at 2007’s TechCrunch40 conference, with a 20% growth rate month over month.

mEgo’s widgets allow users to import information from sites like Flickr, Facebook, and Twitter, which are then presented alongside customizable avatars (you can see an example below). Each source of information can be associated with a different button on the widget that users can place themselves. For example, in the widget below music buttons are positioned on the avatar’s ears and display the user’s Last.fm profile when clicked. mEgo widgets can be placed on blogs and most social networks, and see around 30 million impressions per month.

There are a number of other companies working on embeddable avatars, including Gizmoz and Voki, but mEgo differentiates itself by acting as a hub for a user’s photos and network profiles rather than just a fancy self-portrait. 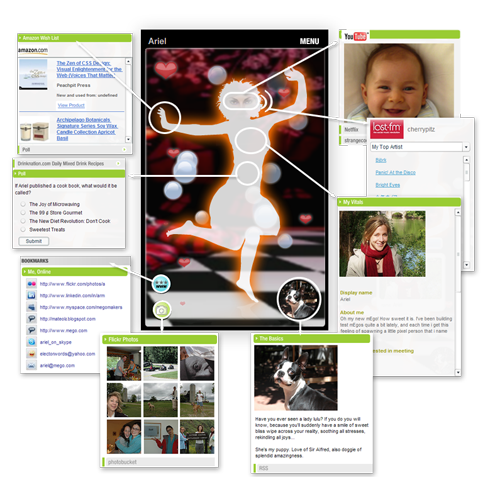