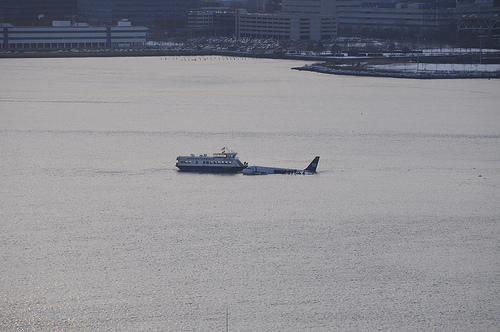 Now this is a feel-good story. All 135 150 passengers + 5 crew members aboard US Airways flight 1549 are safe and sound after a soft water landing and escape into the frigid Hudson River on rafts.

I’m not a very good flier and I read this story by Steven Johnson about the relative safety of air travel. The money shot:

[MIT Professor Arnold] Barnett calculates that it’s more likely for a young child to be elected president in his or her lifetime than to die on a single jet flight in the USA or in similar industrial nations in Europe, Canada or Japan.

When the guys in the CG chatroom started talking about the crash, I was convinced that all of those good feelings Johnson’s story gave me were for naught. Surprisingly – or unsurprisingly – everyone was fine and the plane is now floating calmly in the river like a shark on hiatus.

I’ve been doing a lot of reading on the genesis of engineering for my watch book and I’m consistently amazed at what we’re capable of doing. The stresses associated with flight are middling to most aeronautical engineers and that this plane was so carefully and safely put down in a very thin body of water is a testament first and foremost to the pilot and then to Airbus for making a plane that didn’t crumple with the strain.

I won’t stop sweating during take off and landing and turbulence will still freak me out but I’m now, more than ever, willing to put my faith in the good people who make the airplanes that shuttle us safely all over the face of this dangerous planet.