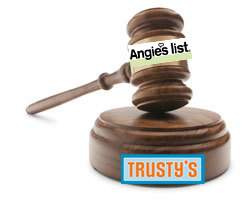 Local business ratings and review service Angie’s List is suing Trusty’s, which we recently reviewed and likened to a sort of Yelp for blue-collar workers, over claims that the latter startup’s founder Christopher Kody illegally obtained thousands of files from Angie’s List in an effort to jumpstart Trusty’s.

According to Indystar, the suit alleges that Cody joined Angie’s List as a regular member and subsequently used an automated software program in multiple sessions to harvest nearly 10,000 reports, ratings and other information which he then pumped into Trusty’s.

Angie’s List says Cody practiced ‘industrial espionage’ using the bot, as spokeswoman Cheryl Reed put it. Trusty’s founder declined to comment on the matter, but had his attorney dispute all allegations with the promise to “defend against them vigorously”.

A hearing in the case is scheduled for next month.

(Thanks to Brandon Powell for the tip)