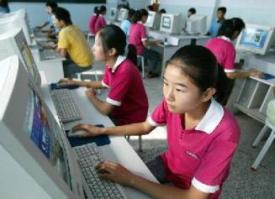 The Chinese government may be keeping a close eye on which websites, blogs and search engines their people can visit, but that’s not stopping internet usage from growing fast throughout the country. The government-related information center CNNIC (China Internet Network Information Center) claims the nation’s online population has grown 41.9% in 2008 to an astounding 298 million users, reports the BBC.

That’s about the size of the entire U.S. population, while eMarketer pegs the online population in the States to be about 200 million.

This further cements China’s position as the world’s largest online population, although internet penetration is still fairly low (22,6%) even if it exceeds the world’s average by almost one percent.

According to the study, usage in the countryside is growing much faster than in urban areas (60.8% year-on-year compared to 35.6% in cities), the numbers of bloggers has increased to +162 million, and accessing the internet through mobile phones is still immensely popular. CNNIC reports that 117.6 million people accessed the internet using their mobile phones last year, up 133% from 2007. A further surge is expected after licences for 3G-enabled mobile phones have finally been issued to China Mobile, China Telecom and China Unicom as from last week. The roll-out of the faster 3G network is expected to commence in 2011.

Imagine what it would be like if the government weren’t so keen in controlling what the Chinese are allowed to view or search on the web.