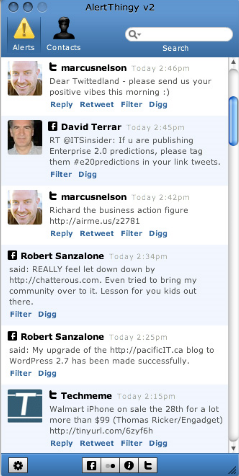 We’ve covered AIR application AlertThingy quite a bit in the past, being one of the most elegant tools available to keep on top of all your social networking accounts from your desktop. Most recently, we announced AlertThingy v2 was going to add support for Digg, Facebook, Jaiku, Pownce and Tumblr besides Twitter, Flickr and lifestreaming service FriendFeed. The release was delayed a bit, and things turned out to be a bit differently than advertised.

Support for Pownce is now no longer necessary, of course, but all the other announced integrations have been included for this upgrade, with the addition of the TinyURL service. But surprisingly enough, the makers of AlertThingy (design & development house Howard / Baines) have decided to no longer support FriendFeed in this edition, which is a peculiar move to make as AlertThingy actually launched as a FriendFeed desktop application to begin with.

The reason is simple enough: AlertThingy wants to be the social desktop application of choice but this actually interferes with the reason for being of FriendFeed, that pulls together all your social networking data inside your browser. AlertThingy fans needn’t worry, though, as there’s now a special FriendFeed-only version of the application alongside the upgraded ‘normal’ version.

AlertThingy v2 also got a fresh UI and adds support for RSS, which makes it double as a desktop-based feed reader. On a technical level, the team moved from using AIR with AJAX, HTML and CSS to a 100% Flex-based application.

I’m already looking forward to the next upgrade, which is supposed to include support for Yammer, the ‘Twitter for companies’ that won this year’s TechCrunch50 and has become an essential tool for our editorial team.