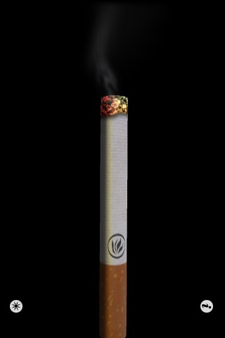 Smule, the company behind innovative applications like the Sonic Lighter and Ocarina, is easily one of my favorite developers on the App Store. The company has developed a suite of advanced technologies revolving around audio information, which allows it to share music on a global scale and (in the case of an app launching today) to use audio to relay information between two nearby cell phones.

Today Nico Becherer, the developer behind the hit application Face Melter, has released the first third party application to use Smule’s core technology. The application, called Electric Smoke, allows users to play with a virtual cigarette. It may not sound particularly exciting, but the technology behind it is impressive – if you’ve got another iPhone handy with Sonic Lighter installed, you can use it to light your virtual cigarette.

Using Smule’s ‘Sonic Modem’ technology, the two phones actually relay information using sound (they literally beep at each other), which means the apps will work even if there isn’t an internet connection available. Smule has lent its IP networking technology to Electric Smoke free of charge in return for promoting its Smule Sonic Lighter app.

While the technology behind it is very cool, the application itself isn’t particularly fun. After launching Electric Smoke, you’re presented with a very nicely rendered unlit cigarette.
Once you’ve got your cigarette ablaze, you can inhale and blow on the iPhone’s microphone as you watch virtual smoke fill the screen (you can manipulate the smoke by running your fingers across it). The game keeps track of how long it takes for you to burn through each cigarette, making for a mildly amusing game that will leave you both lightheaded and winded.

Because Electric Smoke is at least jokingly meant as a substitute for smoking actual cigarettes, the app offers a long listing of random trivia detailing how much money you’re saving and the time you’ve added to your lifespan (other notable factoids include how much you’ve helped the ozone layer). It also offers a smoking-related statistic every time you launch the app, likely as a way to show that it isn’t meant to promote smoking – it’s meant to raise awareness (or help you quit).