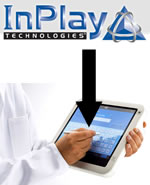 eliminat[ing] the need for a separate electromagnetic digitizer by communicating directly with the capacitive touch sensor, resulting in a smaller three-dimensional form factor and a cost effective solution.

Currently, most capacitive touchscreens have little-to-no support for use with a stylus or fingernail.  InPlay’s WriteSense pen looks to solve this problem by allowing manufacturers to:

Don’t have any idea what the hell “digital stream communication” might be? Don’t worry, neither do we. As long as it works and doesn’t melt our iDevices, no reason to get too worked up by the marketing fodder lingo. Furthermore, as an iPod touch user, I’ve never once wished I could use a stylus as an input device.

On the other hand, this sort of technology would be useful in a tablet PC/UMPC/MID or any other capacitive device that is intended for use with handwriting programs or other applications requiring more accuracy.  The company says that WriteSense will be commercially available in mid 2009.