How many cooks does it take to produce the perfect recipe? I’d say one, a really good one. Barnaby Dorfman thinks that 1,000 cooks can come up with a better recipe than any single chef, and earlier today he launched Foodista around that premise. It is a Wikipedia for food. Each recipe can be collaboratively edited and improved. Scrumptious photos for each dish are pulled in from Flickr, and descriptions are pulled in from Wikipedia itself. You can add or remove ingredients, see the edit history, or add a comment to each page.

The site is well-designed and was put together by Dorfman and two other co-founders on their own dime. It will have to overcome some pretty stuff competition from both established sites like AllRecipes and the Food Network, as well as new cooking sites like Cookstr (read our review) and Open Source Food.

But Dorfman thinks he can do better than all of those sites by collecting better data and organizing it in a smarter way. Foodista borrows not only from Wikipedia, but also from the Internet Movie Database (IMDB), part of which Dorfman used to run when he was at Amazon a few years ago. Every recipe, ingredient, cooking technique, and kitchen utensil links to every other mention of the same thing throughout the site. Dorfman says:

We are taking a structured-data approach to cooking.

Getting the data model right makes it easier to find related recipes along any given dimension. It also will open the door to lots of cool features down the road, like figuring out the nutritional value of each recipe. The entire site, by the way, is built entirely on Amazon Web Services (EC2, S3, and SimpleDB).

The biggest issue facing Foodista is whether a collaborative approach to cooking can ever work. The entire premise of the site is that 1,000 contributors can somehow come up with the perfect recipe. But as any foodie can tell you, many times there is no standard recipe for a dish. There are always variations, which is what makes cooking interesting. Your mother cooks chicken soup differently than mine.

As Dorfman was telling me about his site the other day, I looked up the recipe for cassoulet. One of the ingredients was curry. This is a French dish. Curry might make it taste better (although, I doubt it), but it doesn’t belong in the one standard recipe that Foodista presents. Dorfman simply took it out. I’m not sure who won that argument. Me, for pointing out a flaw in a recipe, or Dorfman, for showing how recipes could become better over time.

The problem is they could also become worse over time, or simply devolve to a bland consensus. Why not allow variations? Dorfman is not opposed to that, but what he wants to avoid is to have “50 cassoulet recipes, and they are all the same.” Fair enough, but let’s at least start with the best recipes.

A few spot checks don’t give me a lot of confidence that all of the recipes are quite yet up to snuff. For instance, take the entry for cioppino, a seafood stew usually made with white wine. The recipe lists both red and white wine, which is just wrong on so many levels. It’s like cooking with a rosé.

My other issue with the site is that it pulls random photos of the dish in question from Flickr, which do not show the recipe you are trying to prepare. This was the case with the cassoulet entry. It showed a picture with a big duck leg confit, which is a key ingredient. But that ingredient wasn’t listed in the recipe (I added it). The reason cookbooks come with big pictures is because food is visual and, for the cook, it helps to visualize what you are trying to create. That means the pictures and the recipes have to match.

These are minor quibbles. I’m sure the wiki cooking hordes will prove me wrong in the end. 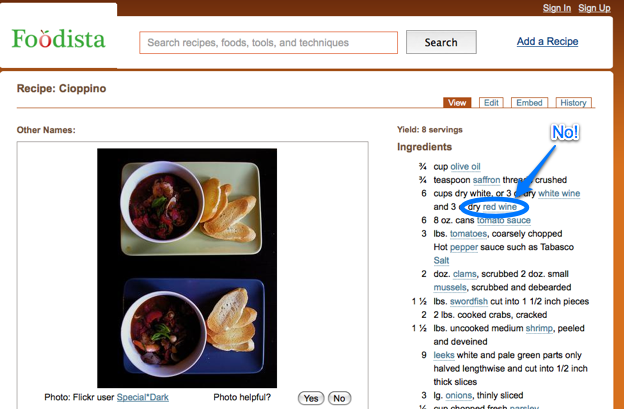