For people who live inside their instant messenger clients and SMS text messages on their mobile phones, Kwyno wants to help bridge those worlds with the Web. Kwyno is a simple service developed by Raphael Caixeta out of Boca Raton, Florida that launches in private beta today. We have 200 invites here.

Kwyno is very raw at the edges, and needs a lot more feedback before it becomes anywhere near useful, but it points in an interesting direction. You enter commands like “check techcrunch” or “check twitter,” and it returns the latest feed headlines or Twitter stream (after you’ve given the service your Twitter credentials). You can add your own RSS feed here if Kwyno doesn’t support it, but Caixeta is also adding them as fast as he can. (This is a side project for him). 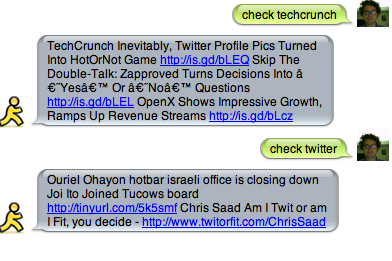 The service can seem a bit pointless at Kwyno itself. After all, it is just bringing in data from other Websites that you could just as easily visit yourself or add to your RSS feed or lifestreaming service. But all the commands also work in IM and, soon, SMS. Kwyno currently supports AIM and Yahoo IM. You add Kwyno as an IM buddy and can bring back headlines and tiny URLs from your favorite feeds and your Twitter account. Its a quick way to check what’s going on without leaving IM. This will be even better via SMS.

Besides checking for updates across the Web, Kwyno also supports a dozen other commands, including the ability to search Google, Digg, YouTube, images, and local listings. You can also send Twitter messages from inside Kwyono, use it as a calculator, look up the weather, or add a task to a Wipee to-do list. The possibilities are pretty much endless. Caixeta can keep adding commands as he dreams them up.

But there is a limit to how many commands most normal humans can remember. Kwyono would be better off concentrating on a few key commands and expanding their applicability. The “check” command is the most important one, for instance, and Kwyno would be much more useful if it supported a much larger list of feeds from the get-go. (Some of the sites it supports now include
CNN, ESPN, TechCrunch, LifeHacker, Gizmodo, Joystiq, and DownloadSquad). Also, when headlines are returned in IM, it would be nice if there was a “more” command to get the next batch.

If you have more suggestions for how Caixeta can improve this service, leave them in comments. 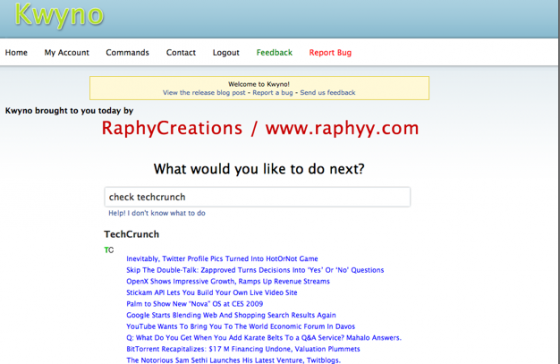 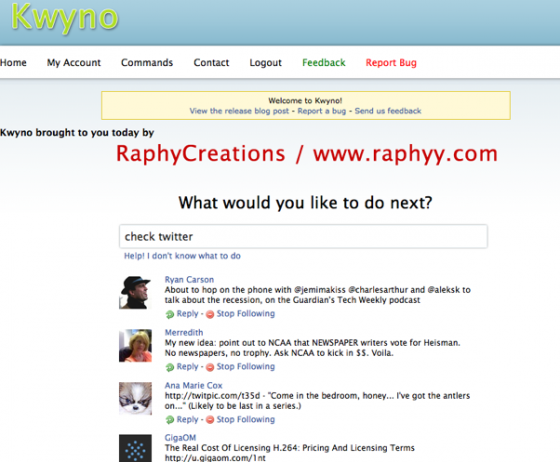