There is something about great sales people or deal makers that is entirely social. They are connectors, as Malcolm Gladwell calls them—people who know the interests, skills, and needs of everyone in their social or business circle and connects them together. If you are really good at this, like Sidney Weinberg (a legend who helped build Goldman Sachs), you are a super-connector.

Zentact has the modest goal to help you become a super-connector. It has a long way to go before it can do that. But it is starting with the kernel of something that is intriguing. At its core, Zentact is a browser add-on (for Firefox only right now) that helps you read the Web with the interests of your social network in mind. If you want to try it out, we have 500 invites for the private beta (but once you are in, you can invite as many people as you want by sending them a message through Zentact).

Here is what is supposed to happen once you have Zentact all set up. Reading an article about black labs? A box pops up to remind you that your co-editor loves black labs and lets you email him the article with a note right from that page. Run across a blog post that mentions a contact’s company? Same thing happens. You can forward that article or link and make yourself look thoughtful in the same way that setting up automatic birthday reminders in your calendar or Amazon makes you look like you went the extra effort to remember someone’s birthday.

“This is basically a karma points system,” says investor and adviser Eric Marcoullier, the CEO of Gnip . Marcoullier and Zentact co-founders John Sampson and Jared Brandt are all MyBloglog refugees. They founded Zentact with a few hundred thousand dollars. (Howard Lindzon is their biggest angel investor).

Before you can start using Zentact, first it needs to ingest all of your contacts from Gmail, Hotmail, or Yahoo Mail. Then—and this is its weak point—you have to tag each contact with their interests, company affiliations, and whatnot. That right there almost makes it a non-starter for me. Some people, I realize, will do this obsessive tagging (sales people, recruiters, biz dev types), but not most people. I have 2,318 contacts in Gmail. There is no way I am going to go through and tag those. It would be much better if Zentact could simply get all of this information from one of my existing social networks like Facebook or LinkedIn, which already know all of my contacts’ interests and affiliations.

The software, however, does have a saving grace. Whenever you email someone in Gmail, a Zentact box opens up right in the email below the address field where you can add tags and other data in a piecemeal fashion. That makes the process a lot less daunting, and lets you focus on the people you actually are in contact with the most frequently.

Once that is set up, then the Zentact box is supposed to pop up whenever it reads a tag contextually on a page and tell you which contacts you might want to email the link with a thoughtful note. It acts a a surrogate super-connector brain in that way. Explains Marcoullier:

The vast majority of people get information, they process it for internal use, and then move on. Why not build a plugin that reads what you are reading and alerts you to the fact that it might be relevant to someone in your network?

That could be helpful or annoying depending on how often it pops up. You can moderate that based on the tags you use. The actual mechanics of Zentact are still a little bit buggy in my experience (although that could just be my dying computer or the fact that I imported way too many contacts). But this is a rough beta and there is a lot of promise here.

Once you’ve tagged a bunch of contacts, then you can click on each tag at Zentact’s Website and see all the contacts who share a certain interest. This could be great for organizing soccer games or biking trips or a startup, or that matter. It all depends on how good is your personal tag database. How well do you know your contacts and what they are good at?

Zentact will soon add the ability to actually connect like-minded contacts to each other, which is really what super-connectors do. When it does that and can automatically tag your contacts for you, then I’ll really be excited about it. But what I really want is for my existing social networks to do this for me. 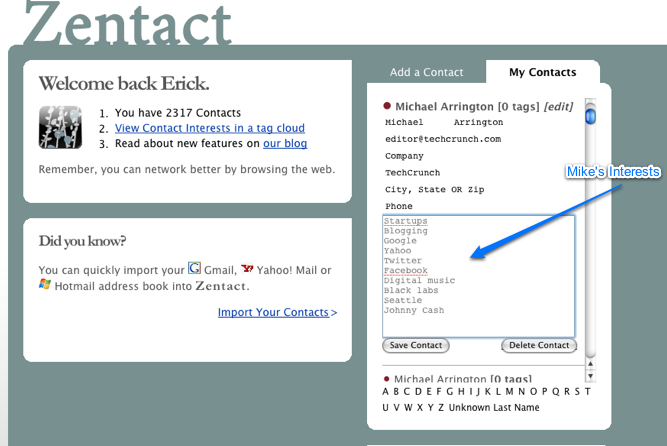 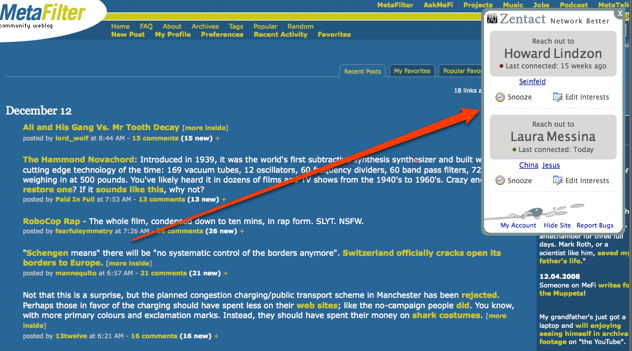