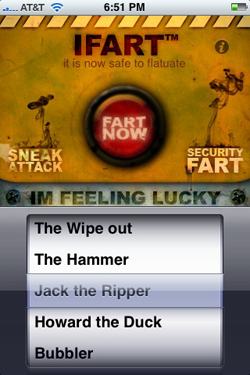 Earlier today we learned that Apple had decided to allow a new genre of apps into the app store with the release of Pull My Finger, a humorous but simple application that emits predictably nasty sounds whenever users pull on a virtual finger. The application was intitally rejected by Apple, sparking debate over the seemingly arbitrary standards it was using in its approval process. Today’s policy shift sets the stage for imitators looking to build on the irreverent success of Pull My Finger, and we’ve already got our next contender in the battle for flatulence supremacy. It’s called iFart, and while it’s an improvement over Pull My Finger, I seriously hope this isn’t the start of a new trend.

First, the apps themselves: while Pull My Finger has the basics down, it doesn’t do much beyond playing embarrassing noises when prompted to. iFart builds on this by adding a ‘stealth’ feature, allowing users to set off their ticking timebombs after a set amount of time. They can also enable a “security” feature that plays one of the noises whenever the phone is moved.

Don’t get me wrong – both applications are funny, and I’ll probably use them to play a prank or two over the holidays. But I fear that developers will now flood the App Store with similar juvenile apps looking to make a quick buck, and we’ll see iFarts and Pull My Fingers overwhelm the Top App lists and overtake the genuinely useful apps like Shazam.

Left alone, the market might let most of these immature apps fade into obscurity within a few weeks (note that not a single ‘lighter’ app is present on the Top Apps list anymore, despite the fact that there are at least 15 of them available). Then again, iBeer is still ranked #5 after over five months. The general population has a seemingly insatiable appetite for dumb shit (remember what happened when Facebook Platform first launched?), and it would be a shame if the some of the App Store’s prized Top Spots were sacrificed for an endless rotation of dumb.

Apple made the right move by letting these onto the store – censorship is a slippery slope, and there’s a place for immature and adult content. But, as with the recently released NC-17 tags, Apple should consider making a tag for ‘Silly Apps’. Give them their own place on the store (perhaps even a Top 5 on the front page), or continue to tweak the store’s layout, but don’t let them overwhelm the apps that add real value to the iPhone.