Just a couple of months ago Facebook redesigned its home page and changed its tagline to simplify new user signups.

Now they’re testing an even simpler interface – instead of getting things started by asking for your name, email, password, sex and birthday, all you have to manage is your actual name. If conversions go up, expect this to be rolled out to everyone.

MySpace continues to dominate in the U.S., with 75 million monthly visitors (Comscore). A year ago Facebook had just 35 million monthly U.S. visitors, compared to MySpace’s 69 million, meaning MySpace was about twice the size of Facebook in the U.S. Two months ago Facebook had risen to just 40 million users, and MySpace had grown to 75 million, so the ratio was still hovering around 50% (53% to be exact).

But in the last two months Facebook has added nearly 10 million monthly U.S. users, surging to 50 million U.S. visitors in November. MySpace has stayed steady, but the Facebook is now 2/3 the size of MySpace in the U.S.

If Facebook’s growth rate v. MySpace in the U.S. continues, they’ll overtake them sometime next year. 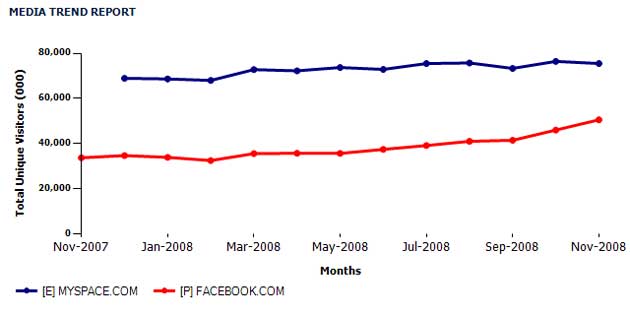