As a European, I’m always happy to see web companies translate their interfaces in other languages besides English. It’s common business sense, since a lot of potential users simply won’t even take a look if the application is not available in their local tongue, and they certainly won’t stay long when all their local friends start trying out a competing service that is. Anyway, FriendFeed understands this too, which is why they’re opening up to a bunch of new users by translating their lifestreaming interface into German (will that be the end of Freundefeed?), French, Spanish, Japanese, Russian and simplified Chinese. 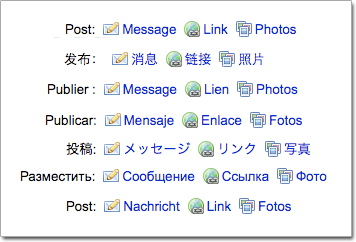 For FriendFeed, essentially a one-stop shop for the social networking updates and news items from your friends, this is a logical step to take. The startup says nearly one third of their users experience the service in their own language, so it makes perfect sense to translate the interface to cater to them, too. The startup also says they’ve gone with the most popular for now, but that they’ll be adding more languages in the future, enabling more people to find the right settings to turn off IM updates, for example.

We’re curious to find out if this internationalization will help FriendFeed get their own hockey stick moment much like Twitter did over the Summer. The service was launched about 14 months ago by four ex-Google employees Bret Taylor, Jim Norris, Paul Buchheit and Sanjeev Singh, and raised $5 million in Series A funding in February of this year.